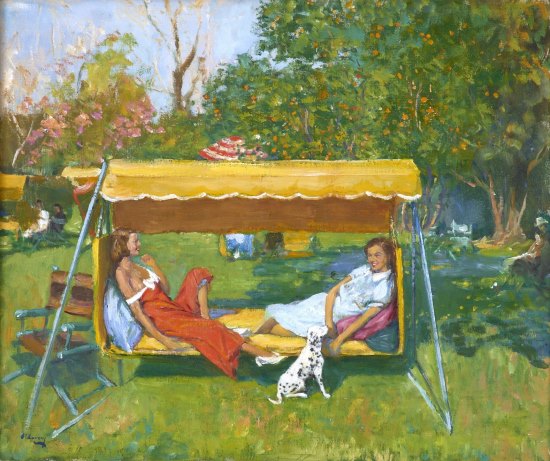 Since moving back into the Carnegie Building in 2011 after the Phase II redevelopment to the Carnegie Building the exhibit of the Permanent Collection has been on a rotation basis and for this particular curated exhibition, one of the main features will be the re-hang of the East Gallery in the Salon Style that was the main feature prior to 2010, with the First Floor Galleries also exhibiting a juxtaposed selection of further works from the varied Permanent Collection.

This exhibition will also celebrate the 30 years since the whole of the Carnegie Building in Pery Square was given over to the Limerick City Gallery of Art and the appointment of a Director/Curator, by the Limerick Corporation back in the 1985.   With the ongoing support of the Limerick City Council, and The Arts Council of Ireland the reputation of LCGA has grown nationally and internationally.  The Permanent Collection has great strengths, with outstanding artworks by Dermod O’Brien, Arthur Armstrong, George Barrett, Robert Carver,  Jack B. Yeats, Sir William Orpen, Séan Keating, Paul & Grace Henry, Maurice MacGonigal, Camille Souter, Nano Reid, Mary Swanzy, Evie Hone, Maine Jellett, Patrick Henessy, Patrick Collins,  William Leech, Sir John Lavery, Charles Lamb, Walter Verling, John Shinnors, Donal Teskey, Amelia Stein, Willie O’Doherty, Jack Donovan, Samuel Walsh, Janet Mullarney  and many more.    The Permanent Collection holds close to 3,000 artworks in various mediums such as paintings, drawings, sculptures, prints, posters, photographs, ceramics, textile, jewellery and various other media.

During this time the Permanent Collection has grown and the body of artworks has grown to feature a number of separate collections such as the National Collection of Contemporary Drawing, (NCCD) and the Michael O’Connor International Porter Collection.