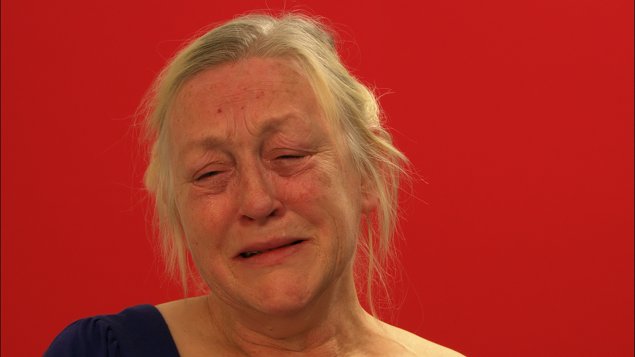 Crawford Art Gallery presents ‘Black Tears’ by Cecily Brennan as part of a series of screenings by Irish and International artists.

‘Black Tears’ (2010) observes Irish actress Britta Smith immersed in unexplained grief. Her sadness is accentuated during the course of the video when she appears to be weeping black tears.

While our instinct might be to politely avert our gaze from a woman in distress, Cecily Brennan’s powerful and evocative ‘Black Tears’ asks us to confront and question personal affliction. The work conjures up a maelstrom of questions directed both to the weeping woman and within oneself addressing, at least, vulnerability and strength.

From a basis in painting and drawing Brennan’s practice has expanded to encompass video, sculpture and installation addressing two related but distinct subjects, that of physical pain and affliction, on the one hand, and that of psychological trauma, on the other. Damage and fortitude are her abiding concerns, and the perennial search for those strategies of survival that allow ordinary human beings to endure and overcome the various afflictions by which they are beset.

To launch the screening Cecily Brennan will give an informal presentation on Thursday 13 January, 5:30 pm (free entrance).