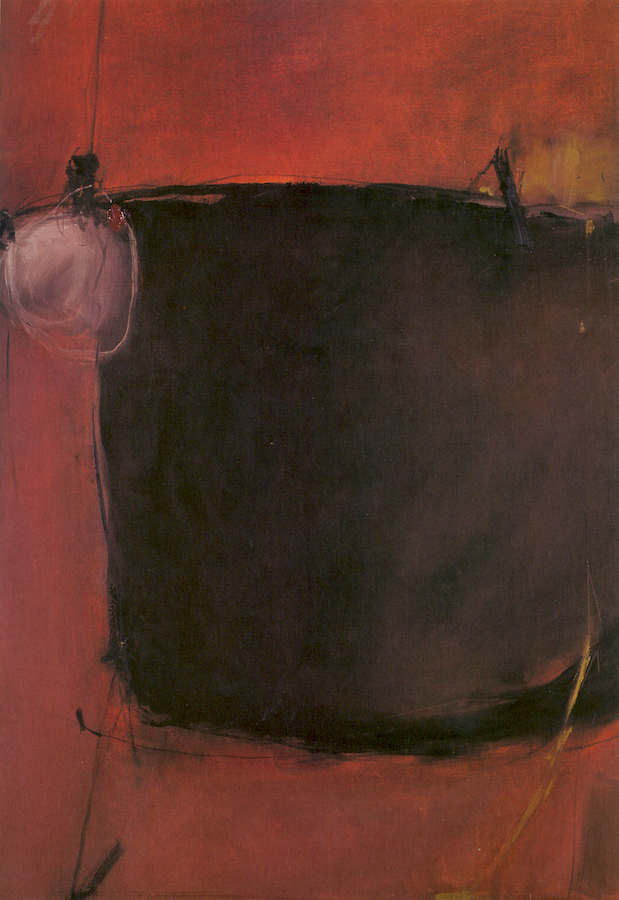 Cecil King (1921–1986) had a close association with the Hugh Lane Gallery. His first retrospective was held here in 1981, and he was Vice Chairman of the ROSC exhibition’s Executive Committee when the gallery hosted ROSC ’77. It is therefore with great pleasure that we present a display of King’s work to mark the 100th anniversary of his birth, and to celebrate his achievements as one of Ireland’s most significant modern artists.

The Hugh Lane Gallery’s collection of Cecil King’s work begins with November (1960), with its animated brushstrokes, and Dawn Image (1962). While more loosely painted than the later works, the combination of delicate line with large areas of colour is consistent throughout, as is King’s use of colour to evoke moods.

King’s connection to different cities is often explicit in the titles of paintings and prints – Berlin, Haarlem, Baggot Street and Saarbrücken – as the artist sought to distil his experience of the place. The Berlin Suite (1970) was inspired by a visit to the city, then divided between West and East Germany. Narrow peripheral bands create tension against expanses of flat colour. Nexus (1973) is a striking painting from the same period, in which a solid block of red is punctuated by slivers of black. It featured on the cover of the catalogue to King’s first major retrospective exhibition, held at the Hugh Lane Gallery in 1981.

King’s later works in the collection, such as Link 3 and Intrusion 2 (both 1985), are realised in more muted colours than the paintings and prints from the 1970s. Surface was important to the artist; to achieve the particular quality of these works colour was built up in several layers using both brushes and foam.

James Johnson Sweeney, former Director of the Guggenheim Museum observed, “Intensity is the key to the quality of Cecil King’s work”. He identified “elegance, meticulousness and conviction, combined with sensibility and modesty” as the essence of King’s art, qualities evident throughout this display from the gallery’s collection.

King was born in Rathdrum, Co. Wicklow in February 1921. He initially began a career in business and became a Director of the Dundalk-based printer W&S Magowan. He took initial instruction in painting from Barbara Warren and Neville Johnson, but was largely self-taught. He held his first solo exhibition at the Ritchie Hendriks Gallery, Dublin, in 1959 and became a full-time artist in 1964.

King was also an avid collector of contemporary art and was actively involved in the management of arts organisations. He was a founding member of the Contemporary Irish Art Society in 1962, and from 1967 was a committee member of the ground-breaking ROSC exhibitions of international contemporary art. He served on its committee until 1984 and his work was exhibited posthumously in the final ROSC exhibition in 1988. The architect Michael Scott then paid tribute to the artist: “Cecil’s passion for the whole concept was immense and combined with his quiet charm, vast knowledge and capacity for hard work helped greatly to secure the success and continuation of Rosc.”