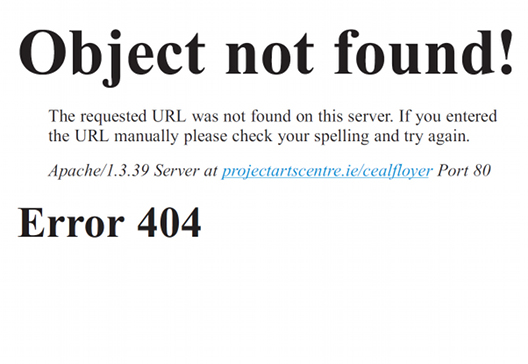 You are welcome to join us for the opening of Ceal Floyer’s Things on Thursday 10 March at 6pm.

The gallery is filled with a collection of identical plinths – a wonderful white, endless sculpture. These structures are commonly used for the display of objects and items, things that demand our attention on top of their isolated, white pillars. But Ceal Floyer’s plinths stand empty, starkly white in a starkly white room, with the objects and items replaced by a beguilingly simple aural representation of their mass. By isolating one single item from a range of pop songs – the word thing – Floyer has assembled a multi-channel playback of dissonant edits that ping and chime all over the room. Speakers are embedded in the plinths and symmetrically aligned speaker cables run neatly along the floor creating a comedic relationship between the stiff-necked, monumental white orchestra and its more random, disharmonic musical production. Things (2009)is a mesmerising aesthetic experience and with longer exposure, one’s idea of a landscape of art begins to shift into a topography of art. Things maps not only the form and aesthetics one encounters through the visual and aural landscape, it also reveals the underlying structure: the topography of the white cube, the intrinsically flawed protocol of presentation and the conventions of spectatorship.

Ceal Floyer’s conceptual art practice is borne of a place of imagination and ideas yet is strongly invested in physical concerns: the object of art, the space of art and the display of art and its semantic representation. In the 1999 work Monochrome Till Receipt [White], spectators encounter a common supermarket till receipt affixed to the wall, what at first glance appears a common list of purchases. But everything on this list is white: not called white, or labelled white, but actually white in colour – white items selected after a lot of unwelcome sampling and checking in shady aisle corners. Floyer creates an image in one’s mind, an image by association. At the same time the practice of commerce and trade are aligned with principles of artistic reduction or minimalism, suggesting that any formal known, such as the manic colour confusion of today’s hyper marketplaces, can be reduced to essential elements and thereby to a plane of conceptual abstraction. In this emptiness lies the potential for perceptual experience, triggered by the concepts and contexts of a list of words. In a similar physical gesture to Things, images are also evacuated and then evoked in 2007’s Construction, in which the visual stimuli were replaced by acoustic ones. Throughout the rooms of Kunstmuseum Krefeld, flat sound-boards were installed flush to the walls where one would normally encounter paintings. Filling the space of the empty rooms were commercially obtainable sound effects, such as hammering, drilling and sanding and the carefully placed speakers amplified the soundtrack of the exhibition’s construction. Thus the emphasis of the exhibition spectacle was replaced by a reflection on the coming-into-being of the exhibition, the activity of constructing that resulted in its formal construction.

If reading text can be like looking at a window through Venetian blinds, then encountering a Ceal Floyer artwork is something similar to catching one’s own reflection in a crowded shop window: looking through, reflected back, turning around to see whether it’s you or someone else; pausing for a second to try to make sense of the real space of the shop, the reflected space of your street and the staged space of the mannequin; becoming distracted by the cacophony of visual noise inside and a fraction of a second later chilled by the glass and metal veneer that looms in a flat plane inches from your nose. These artworks are layered compounds, full of subtle references, comedic quips or poetic analogies and often reflected by the most commonplace or recognisable of daily objects.

With thanks to Lisson Gallery, Rene Arnold and Dr C/Q.