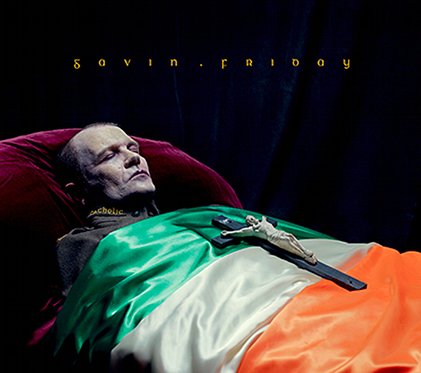 Gavin Friday and graphic designer Pete Reddy commissioned one writer and three photographers to work on the presentation of Gavin’s latest album ‘catholic’.

World Premiere | For one day only

On display in this exposition:

Requiem for the Fallen, a short story by Patrick Mc Cabe, inspired by the words, music and world of ‘catholic’.

In recent years, Gavin Friday’s considerable energies have found expression in cinema, in soundtracks and in theatrical performance. With ‘catholic’ An Exposition Gavin Friday is making an art intervention, with a one day only gallery installation which will be punctuated by live performances at undisclosed times.

The centrepiece of this exposition is the album’s cover image shot by Perry Ogden. It draws on the heroic iconography of the death of Michael Collins. The image sets up parallels between the turmoil of the birth years of the state and the present time of upheaval, of political chaos, and of spiritual, financial and moral bankruptcy. Gavin Friday is clear that this is “an emotional, not a political, album”. The singer likens catholic to “waking from a deep sleep, of letting go and coming to terms with loss”. To find out more check out Gavin’s webpage: http://gavinfriday.com/

Darragh Shanahan documented both photo-shoots with a still and moving camera. Presented here are fragments of the dialogue.

This exposition was curated for the Gallery of Photography by Pete Reddy & Darragh Shanahan. PLEASE NOTE: THIS IS A ONE-DAY ONLY SPECIAL EVENT.