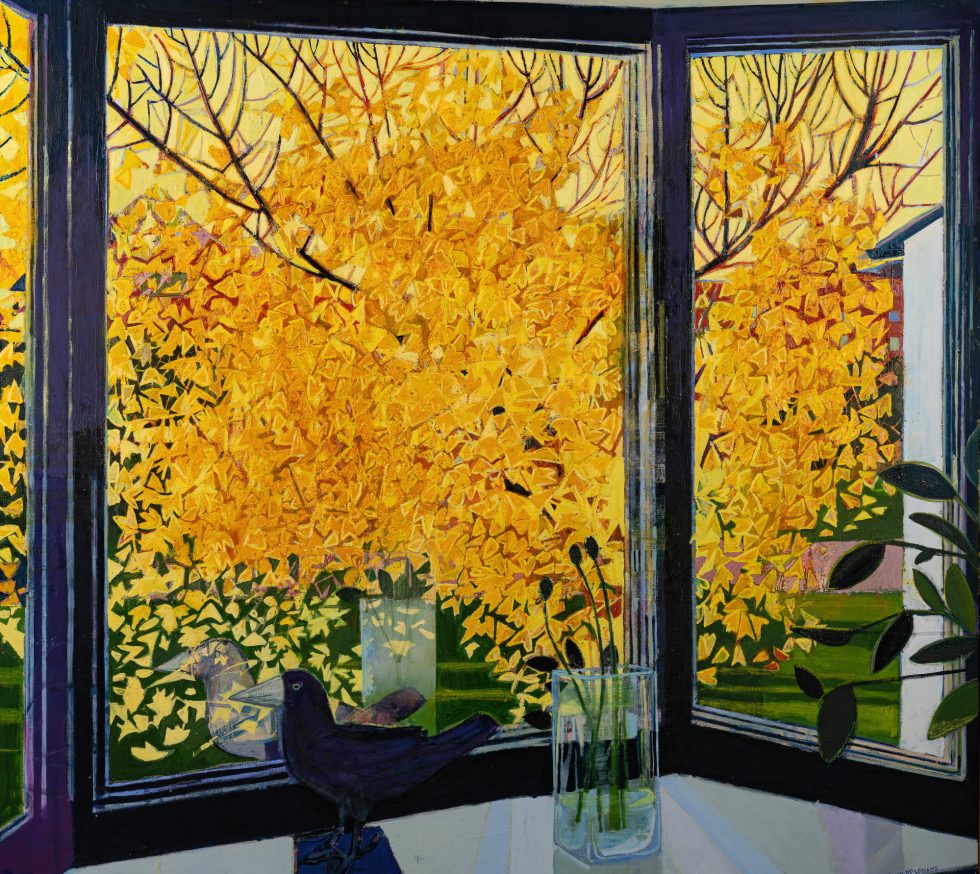 Catherine and Simon McWilliams, mother and son artists, present work together in the Golden Thread Gallery’s Project Space. Taking Betty McCord’s sculpture ‘Rook’ as a starting point, the exhibition is a conversation about the processes of making artwork with familial connections. Both Simon and Catherine are interested in the natural environment, with the rook appearing in both of their works at various points.  This connecting motif draws out a combined interest in interpreting the world around them, whether it’s a goddess emerging from within a tree, bursting with life and vibrancy or a quiet view out a beautiful window, revealing a riot of colour.

Simon and Catherine display immense technical skill within their chosen media. In painting or sculpture, they are informed and inspired by the materials with which they work and have both revisited the subject of trees throughout their individual careers.

Catherine’s tree pieces are evocative of female figures, gods, terrifying in their ferociousness. Female figures have played a central role in her paintings over a number of decades from the 1960s to the present day. In moments of transition, the figures metamorphose into Celtic goddesses and rise above with a sense of joyous freedom.

The cherry tree for Simon might be aligned with his attitude towards paint as a medium. It continues to flower even as the world around changes, adapting to its environment much as he has introduced new materials and new techniques into his more recent works.

The McWilliams hail from a family of artists and this history and connection informs and speaks through their work. They engage with the act of creating in a unique and personal way, using paint for its endurance through generations and ultimately its versatility. The interpretative power of paint is core to their work and acts as an additional connector which, as with the images of trees, continues to provide something beautiful, revelatory and enduring.

Catherine McWilliams, born in Belfast in 1940, studied at the Belfast College of Art and went on to teach, becoming Head of Foundation Studies at Rupert Stanley College until 1990. In 1985 she was elected as a Royal Ulster Academician and she also opened, with renowned painter, Joseph McWilliams, the Cavehill Gallery 1986-2014. She has had numerous solo shows and has been represented in major Irish group shows in Ireland and abroad, including the Bi-Centenary of the 1916 Rising at Hugh Lane Gallery, Dublin, and Pandora’s Box at Arnolfini Bristol. In recent years her work was included in the major exhibition, The Art of the Troubles at the Ulster Museum, Belfast. Catherine McWilliams work is held in numerous Irish art collections, including the Ulster Museum and the Arts Council of Northern Ireland.

Simon McWilliams was born in 1970 and studied first at the University of Ulster and then at the Royal Academy School in London. His style incorporates his excellent skills as a draughtsman and abilities as a painter to produce images that give the appearance of a factual place, but blurred with abstraction. His use of vibrant colour works to bring life to the urban architecture construction sites he often uses as his subject matter and is instantly recognisable.

McWilliams has received a number of prestigious prizes during his career including the Guinness Award at the Royal Academy Summer Exhibition and a major individual award from the Arts Council of Northern Ireland, along with Gold and Silver Medals from the Royal Ulster Academy. He has exhibited widely from Belfast to the US, and his work is held in collections within The Ulster Museum, Bank of Ireland and Queen’s University Belfast.