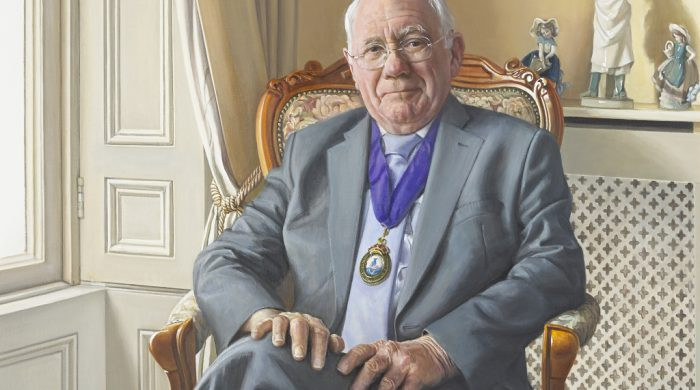 In these days of the ‘selfie’ and the ability to hold hundreds of images of friends and family in our pockets there still persists an interest in the painted portrait. Perhaps like the slow food movement, taking time to create and to appreciate becomes even more valuable in our digital age.

The portraits here are of two kinds, the commissioned and the personal. There is a long tradition in state and public institutions of commissioning images of leaders. Governmental, legal, medical and military (and now to a lesser extent the religious) bodies commemorate and celebrate their chief executives and head officers through having their portrait painted. The other kind of portrait is undertaken by the artist themselves to capture the image and character of family and friends. In this case the artist has chosen the daughters of a two fellow artists, and a grandchild.

Carey Clarke PPRHA is one of Ireland’s most respected artists with a wide interest in all forms of painting through various mediums and subject matters. His painting of the human figure more often than not confines itself to portraiture. In the commissioned portraits Clarke not only chases probity of likeness but also introduces various props and references that allude to the area of specialty or practice of his subject. In the personal portraits (here three youthful women) Clarke dispenses of such devices to concentrate more on the character that emanates from the subject’s physiognomy and to a lesser extent reference their generation through their clothes.

All of these portraits are painstakingly executed. They are planned, researched, drafted, altered and pursued to an excellence of finish.

We are indebted to their owners for lending their work to the Academy for the number of months that they will grace our walls.