Bridget O’Gorman: In the Flesh 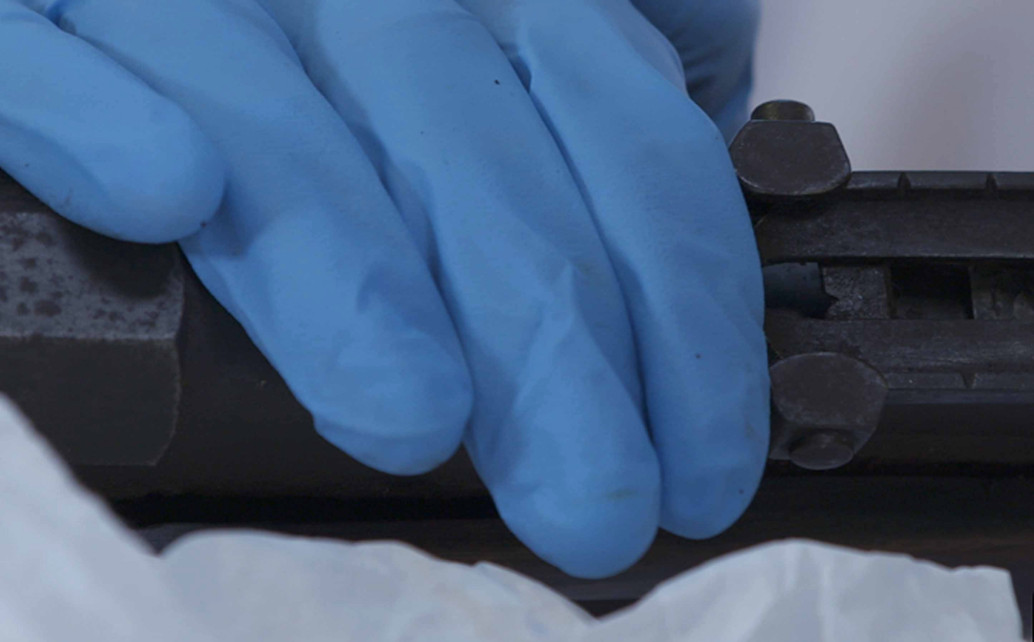 An exhibition of new work by made in collaboration with Brenda Malone, National Museum of Ireland and Sue Rainsford, writer.

This is the first series of three exhibitions where contemporary artists have been invited to make new work in response to the 1916 Rising in collaboration with other research partners and institutions.

In the Flesh is a collaboration between artist Bridget O’Gorman, historian Brenda Malone at the National Museum of Ireland Collins Barracks and writer Sue Rainsford. This new video focuses on the museum store at Collins Barracks and the artefacts stored there – many of which were donated by the relatives of those who were involved in the 1916 rising. In the film these objects are never revealed to the viewer instead they are described through Rainsford’s script which gives a voice to the artefacts which have been protected from destabilising atmospheric contaminants, human touch and light.

This ‘people’s collection’ which will be on display at Collins Barracks later in the year, contains many items that tell the history of the object itself and evidence of the person that used it. These include a tea flask used during 1916 that bears the fingerprints of its owner and a felt hat worn by James Connolly that carries the trajectory marks of a passing bullet.

As with all objects related to turbulent times; the fire arms, incendiary devices and printed manifestos of the ‘peoples collection’ have deteriorated and require conservation in order to stabilise them. The film examines the vocabulary used by museum conservators to describe different types of deterioration. Ironically words such as blistering and weeping are also used to describe injuries to the human body, injuries that could well have been inflicted by the artefacts that are being conserved.

The second video work focuses on the hands of conservator Hannah Power as she carefully attends to the body of a rifle.  This representation of conservation asks us to examine the juxtaposition of the delicacy of the work of the conservator with the violence inherent in the gun itself.

Shown alongside this footage are a set of folded aluminium structures, interspersed with objects fabricated from modelling clay, ballistic gels and soaps which are used by museum professionals and police departments to simulate how human flesh reacts to trauma caused by the penetration of fire arm or blade.  Amongst those items are a set of pinched sculptures, moulded through the heat of the hand, bearing its fingerprints – exploiting the plastic memory of physiotherapy putty and resistance bands – referencing the human body and its relation to the inanimate material.

This exhibition runs from 28th January to 12th March 2016