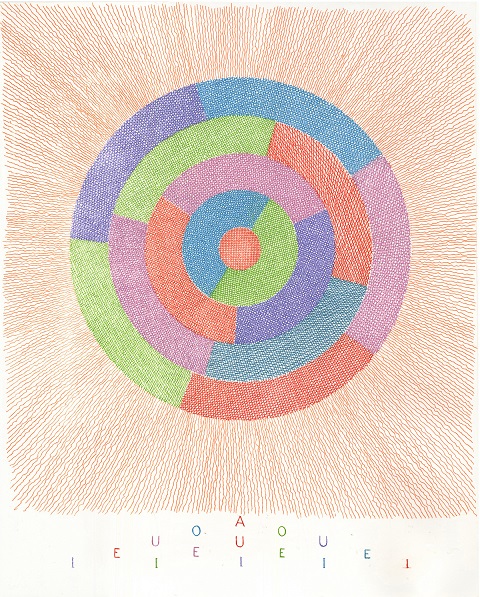 In association with Stoney Road Press

This exhibition will coincide with the 10th anniversary of The Burial of Patrick Ireland (1972-2008), a performance which took place at IMMA in which Patrick Ireland, the artistic alias adopted by Brian O’Doherty in 1972, was waked and buried, in a gesture of celebration of peace in Northern Ireland.

According to fellow artist Robert Rauschenberg, Brian O’Doherty / Patrick Ireland was “always a line man” and this display will celebrate his lifelong dedication to drawing, in particular to works related to his interest in the ancient Celtic Ogham script.

Since 1967, Ogham lines have inspired numerous works by O’Doherty/Ireland such as his ‘I’ Drawings, Vowel Poems, Ogham Sculptures, Vowel Grids, performances by speaker-performers or ‘vowelers’ of guttural sounds in the Structural Plays, wall paintings of the Ogham Cycle, and the room-size Rope Drawings in which Ogham lines have trajected into three-dimensional space.

This exhibition reflects O’Doherty/Ireland’s collaboration with Stoney Road Press to produce suites of limited editioned prints from the seminal drawings and works on paper by this artist.

The drawings and their related etchings, evoke the discourse between mind and body that has absorbed this extraordinary artist at all times. Here, as throughout his oeuvre, the artist encourages the conscious engagement of the senses and the intellect. Through the kinaesthetic effect of modulated colour, the dimension of line, the disposal of words and the dispersal of sounds we are galvanized towards a fundamental awareness of our being, agency and identity.

Brian O’Doherty / Patrick Ireland was a qualified medical doctor and emerging artist when he left Dublin in 1957 and now stands as a seminal figure in the history of Irish and International contemporary art. Renowned as an artist, writer, critic, television host, filmmaker and educator, over the past 60 years O’Doherty has invoked various identities in pursuit of his art, most notably Patrick Ireland, the artistic alias he adopted in 1972 and used for 36 years, as a patriotic protest against Bloody Sunday. In 2008 following the establishment of a power-sharing government in Northern Ireland, the identity and coffined effigy of Patrick Ireland was waked and buried in the 17th century formal gardens of the Irish Museum of Modern Art and the artist reassumed his birth name Brian O’Doherty.

The Ogham script is an ancient Celtic translation of the Roman alphabet into a writing system of 20 characters that consists solely of lines arranged in four registers: in parallel or diagonally, across, above and below a central line.

No Irish artist – indeed any artist – has placed Ogham so centrally to his or her work as O’Doherty. Ogham, a 1500 year old language was brought into the intense avant-garde dialogue in New York, at a moment when conceptualism was evolving out of minimal and serial practice. He further condensed Ogham’s code to ontological concerns implicit in the words ONE HERE NOW and a focus on Ogham’s five vowels: A O U E I.   In their linear Oghamic appearance and implied sound, the vowels have been the basis for a vast array of drawings in various series and numerous sculptures since the 1960s, in what Lucy Lippard has called “an amazing array of relationships”.

In the five latest drawings, the Rotating Vowel series, (2015-16). Here Ogham’s linear lines have softened and slid into curves, segments and arcs in the overall radiating form.  Schematically, each drawing reads radially from core to edge (cumulatively) in vowel formation:  A = I, O = II, U = III, E = IIII, I = IIIII.  The internal drawing of fine lines of various colour in single or set configurations invoke the legibility and sounds of Ogham’s letters, each “an echo chamber of past, present and outward to infinity”.