Brian Fay: Broken Images or When Does Posterity Begin? 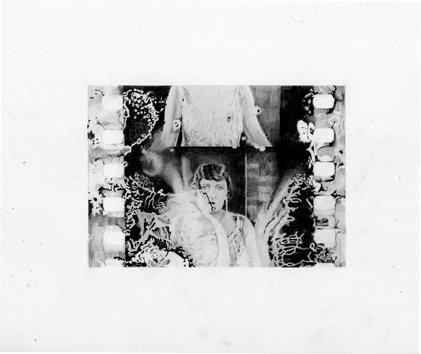 “My work is concerned with using different drawing technologies to record and mark time. My drawings are intended to act as records of the gradual deterioration of original artworks and cultural artefacts. They are produced to remind us that a piece invested with the time of its own making is also deteriorating in slow motion once it is made. They attempt to visualize the action of time on things popularly presumed to be preserved in a state of something approaching permanence.

The drawings for this exhibition are hand tracings of distressed film stock from early silent cinema, old master paintings and contemporary conservation x-rays. The ongoing intention of my work is to register and map the effect time has on the materials and supports of early film and iconic paintings.This work focuses on the relationship of time to the historical and contemporary uses of the lens across 3 areas: Vermeer’s use of optical lenses in the construction of painting, the camera’s development in early cinematic language and contemporary digital x- ray conservation imaging.

Each of these 3 areas and time periods are examined through three new complementary drawing series. The first series looks at the effect of time on the surface of late Vermeer paintings. The second series records the effect of nitrate decay on film stock primarily from 1922, a significant year for both silent film and Modernism. The main film used is Beyond The Rocks with Rudolf Valentino and Gloria Swanson. This film was thought to have been lost and when found in 1995 became a major restoration project before its release in 2005. The third uses contemporary digital x-ray images of iconic work by Vermeer and DaVinci that reveal the time before these painting were completed.The gathering of these particular time periods presents a framework for reflection on the role that time and technology plays in mediating our understanding of image creation, the preservation of its unstable form and the making visible of its own history.” Brian Fay