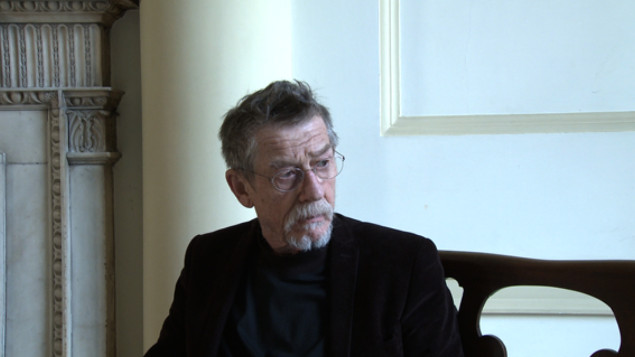 Crawford Art Gallery is delighted to present the premier screening of The Last Day Diary (2015) by Brian Duggan, as part of the gallery’s continued screening programme of Irish and International artists.

The Last Day Diaryis a new short HD film inspired from a specific historical relic from the Johnson County War in 1882 Wyoming. The film’s initial location of privilage and safety in the grand eighteenth century entrance hall of Charlemont House, is in stark contrast to the narration’s guiding text from a hand written letter found on the body of Nathan D. Champion. Falsely accused by a wealthy Wyoming cattleman’s association, Champion was the first person murdered by a band of hit men hired by the cattlemen. The letter he had written during the day of the seige in his cabin is a poignant testament of a person in crisis and the last hours he spent surrounded. The film concludes in Kaycee, Wyoming, where the original ambush took place one hundred and thirty three years ago.

The film is a powerful but comtemplative film which draws parallels to contemporary isssues of immigration and power, and the situations and pressures between those with land and those without. The Last Day Diary expands on Duggan’s larger body of work regarding citizenship, community and resistance which is influenced by themes in the film Heaven’s Gate (1980) a film based on A.S. Mercer’s 1894 book Banditti of the Plains. The book, which was banned in Wyoming due to political embarassment, is an eye-witness account of local small homesteader immigrant groups, mostly from eastern Europe, who are harrassed into abandoning their plots of land to earlier, polictically connected settlers having manipulated cattle grazing rights. The final text is a chilling and unnerving voice simply describing the very real and present danger the individual was experiencing. The film is pertininent contemporary concerns and insecurites of economic migration and social assimilation.

Brian Duggan’s invitation to actor John Hurt and actor and composer David Mansfield to contribute to the production of The Last Day Diary, echoes their significant roles in director’s Michael Cimino’s original 1980 epic western film (which infamously bankrupted United Artists Film Studio due to spiralling production costs). The strategic inclusion of these two proganists – the original score of Heaven’s Gate was composed by David Mansfield – set against the current wider societal backdrop of remembrance and commemoration questions how the written word and historical events are interpreted today with emphasis on ‘experience’ within historical interpretation.

The Last Day Diary was part funded by the Arts Council of Ireland and Fundit patrons.

Brian Duggan concerns himself with more or less dramatic events in crisis, in a prosaic, subtle, but no less disconcerting way. He plunges the viewer into a realm where seemingly casual navigation of space bespeaks chilling (hi)stories. His work examines situations both pre and post events where things do not work out as planned. Recent exhibitions include: This short-term evacuation, POSITIONS Berlin; Life is (not) a Still Life (after Oskar Kokoschka), Balzer Art Projects, Basel (2014); We like it up here ,its windy, really nice, ISCP New York (2013); They Have Tried Everything to Keep Us From Riding…but in the end we always win, Limerick City Gallery; Everything Can Be Done, In Principle, Visual, Carlow, (2012). www.brianduggan.net | www.balzer-art-projects.ch