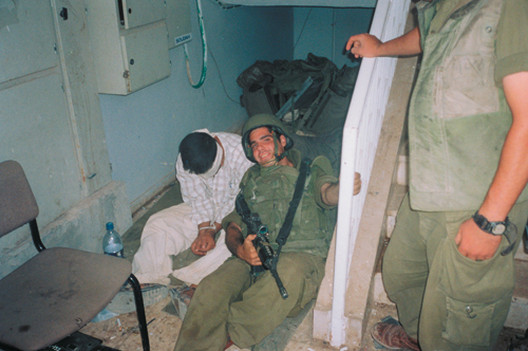 Breaking The Silence, an organisation of former Israel Defence Force (IDF) combatants, presents an exhibition of photographs taken by soldiers serving in the West Bank and Gaza. The photographs and the accompanying testimony offer an insight into the tactics used by the IDF to control and disrupt the daily lives of Palestinian civilians, and reveal the psychological and physical damage those tactics have on both the Palestinian people and the soldiers themselves.

“We saw and did a great deal during our time in the occupied territories, but for the duration of our service we said very little about our experience to our friends, to our families, and even to each other. But after we completed our army service, we chose to break the silence.”

“This exhibition shows the reality of what we witnessed – innocent civilians being beaten, children kept from school, parents kept from work, people’s homes invaded, and much more. The photographs and testimony refute the false claim that the horrors of the occupation are the exception rather than the norm.”

Exhibition tours: Former Israeli soldiers will be on hand throughout the exhibition run to engage directly with visitors, and can provide guided tours for groups.

The Breaking The Silence exhibition is being held with the support of Trócaire.