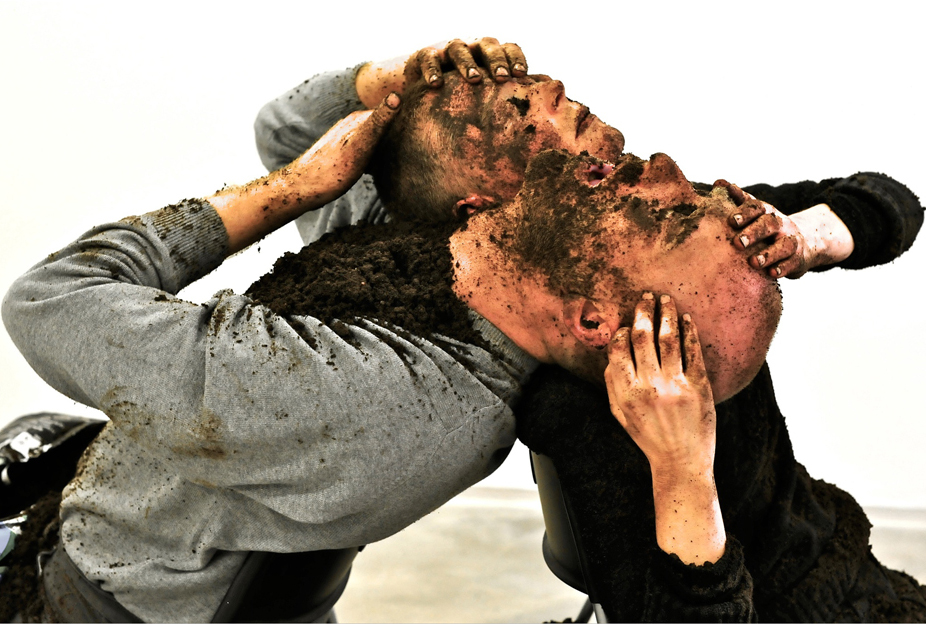 Border Crossings  brings together curators and contemporary artists from Ireland and Australia to investigate cross-cultural issues surrounding ethnic conflict, the legacy of colonialism and the challenges of reconciliation that are relevant to both countries. Australia and Ireland’s histories have been entangled since the first fleet arrived at Sydney Cove to set up a penal colony in 1788. 24% of the convicts that came to Australia were Irish – including hundreds of rebels. All of the curators and artists in Border Crossings are Irish or have Irish ancestry and have woven historical narratives through their work. The exhibition is curated by Mary Knights, who migrated to Australia as a baby with her Irish mother and English father, and Irish artist Michelle Browne. The exhibition draws on this shared history and looks to contemporary relationships between the coloniser and the colonised, and how the past plays out in the present.

Mary Knights notes: ‘Now more than ever, when so many people in the world are dispossessed and seeking asylum, it is important to remember and reflect on the desperation that so many of our own ancestors faced.’

Irish performance artists Michelle Browne, Sandra Johnston and Dominic Thorpe are recognised internationally for courageous, provocative performances that interrogate social justice issues and the complexities of history. They engage very directly with audiences, provoke empathy and shatter complacency. The three Australian artists have Irish heritage. Julie Gough is an Indigenous woman from Tasmania and Yhonnie Scarce is an Indigenous woman from Woomera, a desert location in South Australia that was the site of nuclear testing in the 1950s. Sue Kneebone’s Irish ancestors left Ireland after the Great Famine. Researching family histories and historical documents Julie Gough, Yhonnie Scarce and Sue Kneebone explore the complexities of cross-cultural relationships and engagements and ponder how was it that some of their Irish ancestors, so long familiar with the tyranny of colonisation so easily slipped into the role of coloniser, dispossessing the Indigenous people of their land, culture and language.

For this exhibition Julie Gough researched colonial records and compiled data on 3775 Irish convicts  transported to Van Diemen’s Land. The records hint at the fractured lives of the men and women exiled from Ireland. For example, the entry for James Hevy reveals that the 22 year old seaman from Dublin was sentenced to transportation for life in 1833 and had a number of tattoos including the name ‘Isabella’ on one arm, and on the other, the wistful words: ‘the ocean may between us roll and distant though we be dearest should we never meet more I’ll still remember thee’. Julie Gough investigates the aura and politics inherent in a person’s name and indeed the memory or records of a name. Records and then graves mark the presence of Gough’s Irish ancestors which contrasts starkly with the absence of her Aboriginal family history: they have been erased from record. At the same time that the Irish were being imported, the Indigenous peoples of Van Diemen’s Land were exiled to Wybalenna on Flinders Island in the 1830s and 1840s in a “Conciliatory Mission” whose result was rampant disease and mass death.

The starting point for Sue Kneebone’s sculptural and photographic works was her many Irish ancestors. Kneebone utilises archival materials and colonial-era objects to interrogate colonial settler culture with a darkness that is sometimes laced with a bittersweet-humour.

The performance and sculptural work of Irish artist Sandra Johnston, is based on a residency in Warlukurlangu Artists Art Centre, one of the longest running and most successful Aboriginal-owned art centres in Central Australia. Warlukurlangu means ‘belonging to fire’ in the local language, Warlpiri, and is named after a fire dreaming site west of Yuendumu. While there, Sandra Johnston immersed herself in the community: mixing paint, making canvasses, bringing water and food. Gathering discarded objects – deflated basketballs, ash and coals, staples – Johnston imbues these objects with a political charge and a fragility that is life in the bush.

Yhonnie Scarce was born at Woomera in South Australia and belongs to the Kokatha and Nukunu people. Stories passed down the generations from mothers to daughters included the occasional oblique aside about a Patrick Coleman from Tipperary, the father of Dinah’s son William “Willie” Coleman, a pale skinned baby born around 1890 at Fowlers Bay. Sifting through the SA Museum’s photographic collection Scarce found a photograph of Dinah, her great, great, grandmother. The faded sepia photograph depicts a desert woman with a powerful gaze. In Border Crossings Scarce speculates about the nature of the relationship between her Granny Dinah and Patrick which has resulted in a large Indigenous family – many of whom have inherited Patrick’s fair Irish colour and some still bear his name.

“Mary Reilly steals three handkerchiefs. It was a gambit to be transported to join her husband in Australia, exiled for life for stealing food.” This text, based on a real story, comes from the first of Michelle Browne’s two performances during the exhibition, which will take place on 10 th July at 2pm. Michelle Browne’s second performance, from noon until 5pm on Saturday 16 th July will follow on from her research into Mary Reilly and investigate the wider theme of Irish immigrants in Australia and the gaps in time and space between them and their loved ones. In preparation for this performance, the artist is requesting that people give her the names of their loved ones who have emigrated to Australia, and they will, in return, receive a handkerchief with the name embroidered onto it. Interested participants should e-mail maeve@galwayartscentre.ie

Dominic Thorpe’s performance work is recognised for being a visceral yet accessible response to stories of traumatic experiences, particularly those occurring as a result of cultures of silence. His work often deals with legacies and continuing realities of abuses: abuse that happens within or around institutions and systems that purport to care for people who are directed to them for help. Thorpe will exhibit new video and text based work and will also perform during the exhibition. His work takes the Irish ballad ‘Fields of Athenry’ as a starting point. By inviting a small number of people who have lived experience of Ireland’s direct provision asylum services to translate the song lyrics to their own native language, he connects Ireland’s history of prison ships bound for Australia with the reality of people currently arriving to Ireland from countries continuing to experience conflict related to past colonisation.

The exhibition will open at 2pm on Sunday 10 th July, where Michelle Browne will do the first of two performances, and run until Sunday 24 th July. All of the artists and curators will give a free talk about the exhibition on Friday 15 th July at 2pm. There is no advance booking necessary but people are advised to arrive on time. On the following day, Saturday 16 th July, there will be performances by Sandra Johnston, Michelle Browne and Dominic Thorpe from noon until 5pm.

Border Crossings has been supported as a part of Culture Ireland’s 2016 International Program which commemorates the centenary of the Easter Rising.

Organisational partnerships between the Trinity College Research Hub, Dublin; and the University of South Australia’s Hawke European Union Centre and the SASA Gallery supported curatorial research. The project has gained substantial support from the Irish Government, the English Government, the South Australian and Australian governments through Creative Ireland, the British Council, Arts SA, and the Australia Council of the Arts.