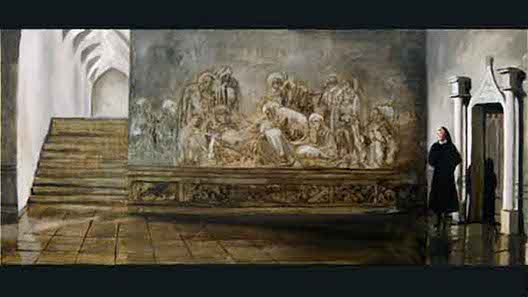 Over the last year or so, I have gone back to my beginnings. When I was in college in 1990 I did some “Test Pictures”, half joking, whole in earnest. The problem then was the same as it is now: If I can paint anything – then what should I paint? Hence the test pictures – I was watching a lot of TV at the time of course, being a slacker student. But it had a kind of sense to it, especially when you consider that one of my favourite painters was (and is) Jasper Johns, who painted the wonderful “Target” and “American Flag”.

So the TV Test Card is a kind of found image. And in a way that helps to give a context to the other paintings in this show. Although they seem like a departure from previous work, I have always tried to paint the everyday, the objects that are seen all the time but rarely observed. In this case, though, the images are often observed but rarely painted. We all spend a lot of time looking at screens, tvs or computers, but these have rarely been painted as they are, with all the trappings and iconography.

So in a way it seems logical to proceed therefore to other iconic screen images. Thus the Sound of Music is so recognisable it was ideal for this purpose. I was also attracted to the formal construction of each image in the film, often symmetrical. They are very considered by the cinematographer which gives them a sort of stability not seen much these days in a world of handhelds.

The paintings are of the screen idea, hence the black bars at top and bottom, to show that its a screen. Similarly, in the YouTube paintings, the important thing is the interface. It is the icon. The image of the tank for example, is fairly arbitrary, chosen for its beautiful colour harmony.

I am not a photorealist, and I have tried to paint these moving pictures in much the same spirit as I would a plein air landscape or life painting. They are not perfectly painted, there are lots of brushmarks. In fact to me it’s the flaws in the painted surface that make it interesting.

At the same time that I was working on the screen paintings I’ve been exploring slightly varying methods of painting landscapes and figures, some of the best of which are also exhibited here. And of course a couple of wildcards.