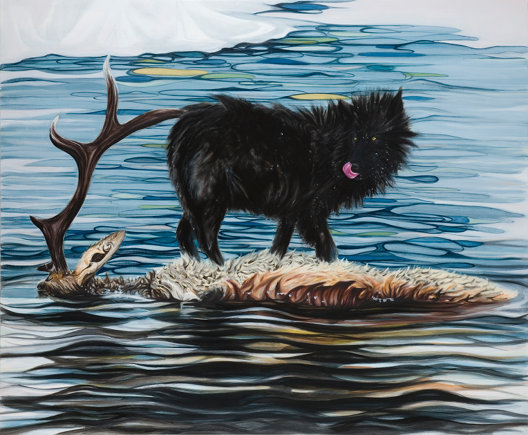 In this exhibition – as with Paradasaeidae at Monster Truck, Dublin in 2009 – Reilly continues her artistic inquiry into nature. Almost 60% of the world’s population live in urban areas, finding themselves at a remove from the natural world, mediated as it is for them as a result of necessity, fear and the geography of urban development. In Japan, some practise ‘shinrin-yoku’, or ‘forest bathing’, a short reconnection with nature and an exposure to specific natural chemicals, as a way to improve health and wellbeing. Much of this artist’s forest bathing is practised in the vicarious pleasure of the environment, mediated by recording and reproduction technology. Bennie Reilly presents us with the fruits of such a skewed and fragmented education on the natural world. A fascination with the under-familiar, the little known and the rarely seen, but an exposure confined to nature documentaries, the pages of Natural Geographic as well as the flora of her local parklands. Rather than relying on empirical vistas, the paintings, drawings and wood carvings in this exhibition combine a prescribed perspective on nature with a sense of that which might exist beyond the boundaries of the camera lens. Addressing the potential for misinterpretation and flawed perception, both conspicuous and subtle, while weaving such perceptual anomalies together with studious accuracy, she scratches the surface of the vast natural world.

Born in Dublin 1982 Bennie Reilly graduated from IADT, Dún Laoghaire in 2004 and received her MA from Kingston University, London in 2008. She has exhibited in galleries such as Mother’s Tank Station, Temple Bar Gallery, Kevin Kavanagh Gallery and the Royal Hibernian Academy where in 2009 she spent time as an artist in residence. This is the artist’s third solo exhibition; she is based in Dublin.