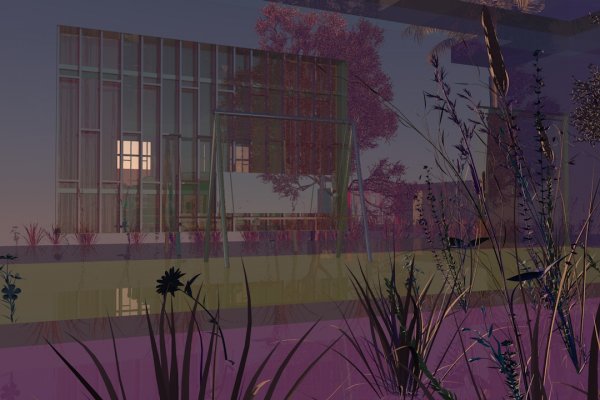 The LAB is pleased to present, Illusions of Love Dyed by Sunset, a solo exhibition of new work by Bassam Al Sabah, including sculpture, painting and video.

The work within the exhibition grapples with the broadcasted image, taking reference from Arabic dubbed Japanese anime series, which were broadcast across the Middle East from the 1980s onwards and were a staple backdrop to the artist’s childhood in Iraq. Tackling themes of revolution, war and exile, the works consider the influence and agendas of these Japanese anime on Arab popular culture.  The distance of time and geography allows for a new investigation of the impact of these cartoons and the work projects political meaning onto these cartoons, which have connected with multiple generations of now adult Arabs.

A new CGI film presented In the video projection space features a digital recreation of the artist’s former home in Iraq, which his family cannot return to. As the film moves through the house, digital images begin to escape from the forgotten TV and computer screens and materialise into living forms at turns alluringly captivating and menacing. The works produced are preoccupied with a kind of chronological incoherence and defined by a nostalgia for lost futures.

We have invited Lívia Paldi to write this commissioned essay in response to the exhibition.

Over the past few years Bassam Al-Sabah has been developing a sculptural language, a set of associated motifs and forms, a sort of vocabulary through which he reexamines the experience of exile, the sense of loss and displacement, and diaspora identity. Based on a handful of family photographs but mostly on iconic characters of 1980s animated action cartoons this set keeps migrating and morphing through various sculptural constellations and environments collapsing analogue and virtual forms, spaces and imagery.

For his current solo exhibition at the LAB’s clear-cut glass (white) cube Bassam not only reconfigured but also rescaled both elements and settings from recent iterations including the clandestine appearance at the former premises of the Eight Gallery[2]. The dust carried me into the watchful summer merged an experimental studio environment and a gallery display fully inhabiting the grand through disintegrating Georgian room interior turning it into a domesticized apocalypse. Arranged in different floor constellations, as bric-a-brac on the mantelpiece, and on his signature set of JVC TV towers the installation featured a collection of 3D printed, hand sculpted and resin casted objects and projection along with short animations of morphing explosions, space thunders and rainbow energy. There is a deliberate choice of materials, substances and textures and the low-end economy of production that have a capacity to play with objectness and deceptive appearance / presence.

An added twist to this spectral environment, was the looped speech fragment of George W Bush’s infamous announcement of the invasion of Iraq that snapped one back to reality and the necessity to establish a position in relation to that history with a deepening sense of otherworldliness.[3] The integrated piece of news into his personalised archive stands as a reminder of the intricate and absurd mechanics and cynicism of populist politics.  The omnipotence of the good and evil binary and its rhetoric, manifest through the twisted manipulation of popular cultural symbols and narratives.

Illusions of Love Dyed by Sunset revisits Bassam’s intensely personal story of his Iraqi childhood and vivisects the parallel universes of animation fantasies, self-made mythologies, which served both as a distraction and anesthetic to separate the reality of violence and destruction of the ongoing war.

Within a distant and measured staging the exhibition lays out fragmentary scenes of a post-fictional home-scape. Somewhere between oblivion and misremembering the central video animation, a digital reconstruction of a family house, presents us with the unattainability of producing an objective record. The video game style simulation leads back to the distant childhood home environment in Baghdad – a ghost house appearing and disappearing as a mirage over the computed horizon. The digitally revived blueprint is based on retrieved and edited memory of family members and was made in collaboration with Bassam’s sister who works as an architect. As we are taken for a virtual walk through the vacant rooms the eeriness grows as each space gets gradually filled with dubious substances, flowing out of the radio and the TV screen. These deliberately low quality visual effects reappear in the larger installation as a solidified sculptural element twisted into a combination of shiny coloured-glittery semi abstract forms. The video has a slide-show counterpart that projects a series of brightly coloured more detailed stills of the various interiors all lit by some dramatic sunset or the after glow of an explosion.

Centrally positioned, full and fragmented, lie the resized replicas of his lead protagonist, his childhood animation superhero UFO Robo Grendizer / Goldorak. Recurring in all his sculptural installations – either a standing or broken figure, the immortal hybrid masculine-superpower “Goldorak draws from the equally recognizable tradition of Japanese robot / transformer / superheroes from outer space (his “color scheme” and “facial features” are reminiscent of Ultra Man’s, and he is constantly fighting dragon-like robotic monsters).[4]

Arabic dubbed-Japanese animation hit the Middle East in the 1980s and the political and military authorities might have also been keen to boost their propaganda seeing them in all media aspects as an effective weapon. Grendizer was one of the super robots that had catapulted into the Middle East straight from a Japanese anime television series created by manga artist Go Nagai. Shaped by the complexities of the 70s globalizing post-imperialist Japan, its postwar politics and technical-industrial development and Westernization largely linked to U.S. occupation, the more than 70-episode long series whose narrative translated and merged the perpetual threat of a nuclear apocalypse, of totalitarianism, and the cold war games of power played out within the intricate Asian geopolitics. It entered a parallel history that started with the Islamic revolution in Iran 1979 and the American hostage crisis in 1980 changing the political dynamics in the Persian Gulf.

As one of the longest aired animation shows ever played on the government-run television in Iraq, it became one of the most popular series in the 1980s and occupied a special place in the socialisation of generations. In the Middle East from Iraq to the underground shelters during the Lebanese civil war[5] the ‘Grendizer generation’ eagerly followed and matured alongside the slowly unfolding storyline of doomed humanity with an expansive arsenal of lethal weaponry, space ships and landscapes of destruction (easily stand in for both the past and current war-torn landscapes from Iraq to Syria).

Grendizer/Goldorak, the human-controlled super-weapon-war-god, became both an iconic transnational hero and a politicized mascot that also started ‘to represent’ nationally rooted political and civil struggles.

Bassam belongs to the younger end of the ‘Grendizer generation’, for whom the watching of animated action cartoons made the everyday volatile conditions submerge within the fictional world of fighting omnipotent superpowers. Beyond the protective shell of their family home during his first ten years several armed conflicts took place: the Iraqi Kurdish civil war (1995-96), the bombing of Iraq (1998), and the Iraqi war starting in 2003 that finally made his close family leave for Ireland.

At the LAB the Grendizer superhero replicas appear as defused of action and power. Constructed as if of deflatable plastic, one almost life size fans back limply on the floor as if a collapsing prop while the unfired clay replica placed on an imitated catafalque suggest an ironic homage.

As much as his personal experience has played a strong role in his artistic trajectory Illusions of Love Dyed by Sunset proposes a tighter display and a more focused inquiry into material-sculptural qualities and their performative potential but also to extend his investigation through the public history of his childhood hero of the prevailing patriarchal power structures and privilege.

[2] The dust carried me into the watchful summer, Eight Gallery, Dublin 2017

[4] Fabienne Darling-Wolf: What West Is It? Anime and Manga according to Candy and Goldorak. In: Imagining the Global: Transnational Media and Popular Culture Beyond East and West. The New Media World, 2014

Bassam Al-Sabah’s practice aims to convey visions of war, resistance and perseverance. His work in multi-media installation utilises video, painting and sculpture and is concerned with how the past is constantly reviewed to meet the present.

Examining the agendas and effects of children’s broadcasting in Iraq between 1970 to the present day, scenes of war and destruction are shown in parallel with fantasy and reality, the hero and the everyday, the make-believe and fact. As the juvenile fantasy breaks down into the veracity of adulthood, the links between violence, representation and preservation are deconstructed.

Al-Sabah graduated from IADT’s BA Visual Art Practice in 2016 and was awarded the RHA Graduate Studio Award. He was also shortlisted for the RDS Visual Arts Awards, curated by Alice Maher. He recently presented a solo exhibition at Eight Gallery and was listed by Gemma Tipton in the Irish Times as an artist to watch in 2017.