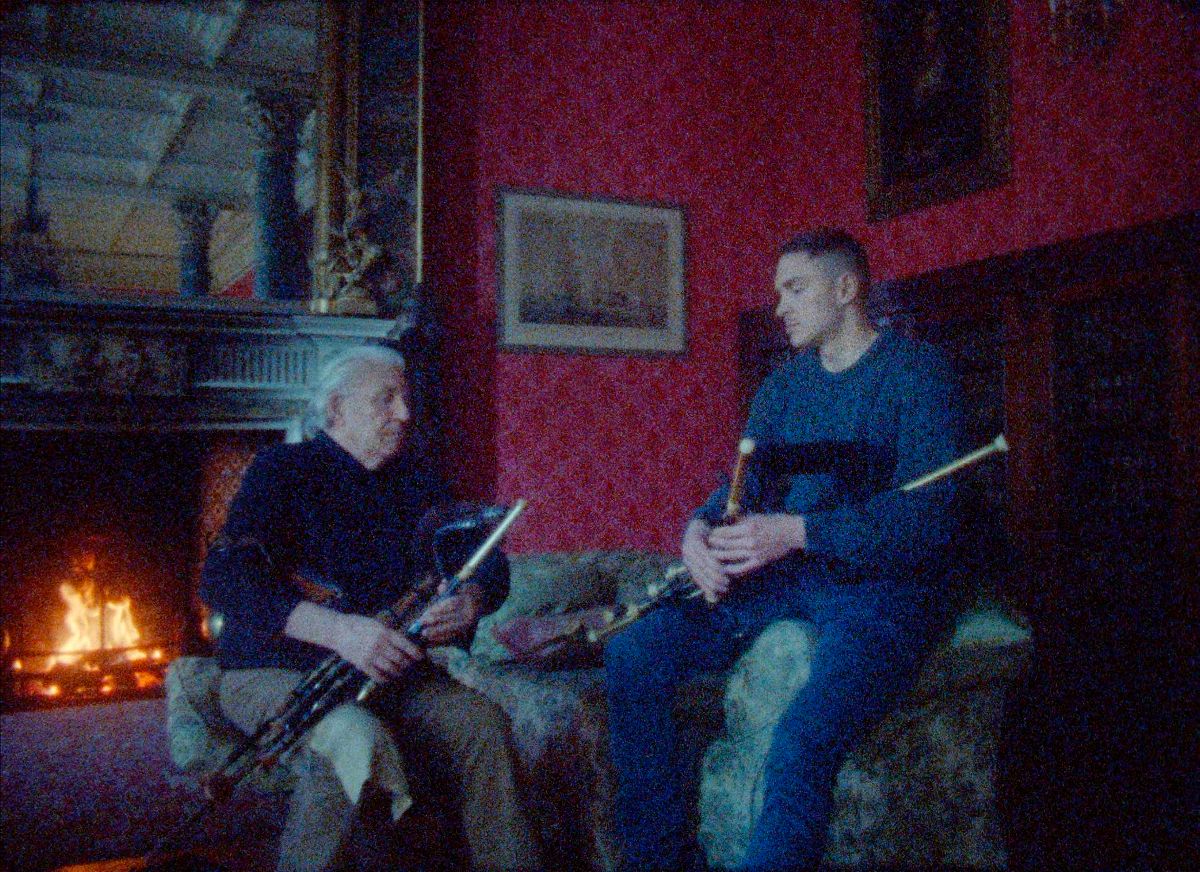 The Brazilian/Irish duo Bárbara Wagner and Benjamin de Burca create films that excavate narratives and practices of particular communities, often from underrepresented social backgrounds. These films operate at the intersection of documentary, fiction, and musical.

The artists collaborate with other artists specialising in various forms of expression rooted in popular culture, from dance to music. They are led by the expertise of the individuals with whom they work, rather than just “giving voice” to a group; for instance, their collaborators often cowrite and/or perform in the films.

One Hundred Steps draws from the ideas of the Irish artist and writer Bob Quinn on the origins of the Irish people. Quinn’s Atlantean documentaries, filmed and broadcast in Ireland in the 1980s, explore the influence of North African worldviews on Irish identity.

One Hundred Steps is set in two locations, each corresponding to a chapter in the film: Bantry House, an aristocratic seventeenth-century Anglo-Irish home in County Cork, in the southwest of Ireland, and the Musée Grobet-Labadié, a nineteenth-century bourgeois mansion in Marseille, in the south of France. The two venues embody the British and French colonial past, respectively, through their architectural luxuriousness, the opulent collections they hold, and the social status of their former and current owners.

In the first chapter, shot in black and white, a staff member guides visitors through Bantry House. These visitors are Irish traditional musicians, singers, and dancers, who then perform for the camera in distinct settings. Bob Quinn also appears, pointing his camera to two Irish pipers. This scene, the only one in color, mimics the style of documentaries, alluding to and paying homage to Quinn’s work.

The second chapter, also shot in black and white, follows the structure of the first: a tour guide welcomes visitors to the Musée Grobet-Labadié. This time they are immigrants from the Maghreb region of Africa living in Marseille. They perform for the camera in and around the building, for instance playing cards against the nearby street noise or singing in Arabic or in Occitan, which is spoken in southern France, Spain, and Italy.

Both locations stage an “occupation” of spaces of privilege by those who are historically segregated from them (Irish musical traditions within British-ruled Ireland) or excluded from them (North African–descended populations in Europe). They enable marginalized forms of expression to demonstrate their capacity to resist the dominant powers from the past and today.

The presentation of One Hundred Steps in a gallery setting includes a carpet depicting Celtic and Islamic patterns bleeding through and intertwining. Evoking the interiors of the buildings in the film, it extends their architectural features into the viewing experience, thereby blurring image with reality.
One Hundred Steps was co-commissioned by Manifesta 13, Marseille, and VISUAL, Carlow; produced by VOLTE and Wagner & de Burca; and funded by the Arts Council, Bundesregierung für Kultur und Medien, Medienboard Berlin Brandenburg, V-A-C Foundation, and Ammodo.

The presentation of One Hundred Step at SIRIUS is part of an Irish tour managed by the curator Rayne Booth.