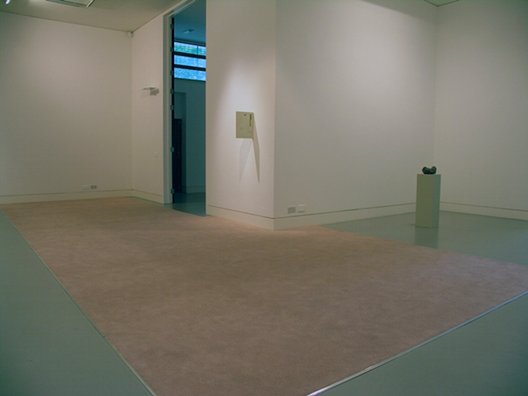 ‘Curbelow’ – a fitted carpet traversing two gallery spaces – aspires to a promotion from fixture-and-fitting to sculpture and/or attempts a demotion from sculpture to fixture-and-fitting, or very likely wants to find the space between the two, the half a dimension between these minimal ideals. Such surfaces tend towards the office, the home, the foyer – anything but the gallery. As an import from an alien genre the work squats with uncertain intent, mildly glamourising flatness.

Alongside this, an audio work – the artist’s voice re-enacting both parts of a dialogue, interlaced with reminiscences tinged with the literary and the ornamental. These floating statements of drifting intent accumulate meaning along a tide line of ghostly solitude.