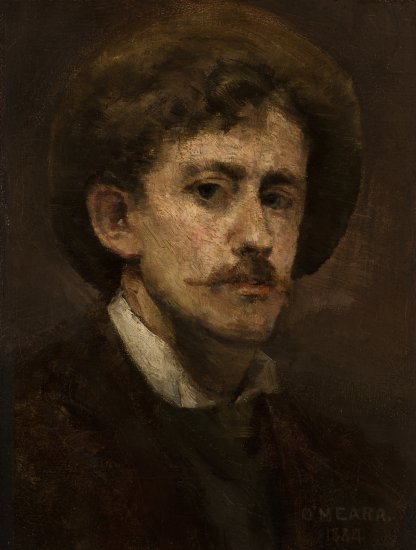 As part of our theme Artist as Witness: Migrations, this display of paintings in galleries 12 and 13 explores the work of  Irish artists who, influenced by innovative new developments in en plein air painting on the Continent travelled abroad to develop their art practice.  The Taylor prize set up in 1860 provided monetary support for artists who wished to travel and study abroad. It enabled many Irish artists to experience at first hand the pioneering developments occurring in France where the art movements of Realism, Impressionism, Symbolism and Post-Impressionism were to the fore of revolutionary art practice. In Britain, artists including Philip Wilson Steer, whose work is also on view here, promoted modern French painting through the New English Art Club. A rare self portrait by Frank O’Meara which was recently acquired by the Gallery with the financial support of Mary Stratton-Ryan is also on display following  conservation treatment by Lucia Fabbro, Conservator.

In Belgium, the reputation of the Academie Royale des Beaux Arts at Antwerp during the 1870s and 1880s attracted students internationally and Walter Osborne and Roderic O’Conor were among the Irish artists who studied there. The Academy’s teaching philosophy was led by Charles Verlat, Professor of Painting. He emphasised excellence in draughtsmanship alongside a vigorous handling of paint and encouraged students to paint rapidly out of doors using bold colours.  From Antwerp, many of the Irish artists such as Roderic O’Conor and John Lavery, headed to the artists’ colonies in Brittany including Pont Aven and Beg-Meil while others favoured the French countryside around the rural village of Barbizon at the edge of the forest of Fontainebleau as well as the picturesque villages in Britain.

In Paris, numerous new academies emerged in opposition to the academic teachings of the École des Beaux Arts. To advance their practices, many of the artists taking advantage of the new public transport system headed off by train to the artists’ colonies which had sprung up around Fontainebleau. These colonies were thronged with those seeking to live the bohemian dream and capture idyllic subject matter drawn from rural life.

The Irish artist Frank O’Meara studied at the atelier of Carolus-Duran in Paris. There, he became friends with John Singer Sargent who joined him for a time in the artists’ colony of Grez sur Loing near Fontainebleau.  O’Meara and fellow artist William Stott of Oldham’s preference for autumnal light and even, muted colours in their paintings is in marked contrast to the sun-filled exuberance of the paintings of Walter Osborne, William Leech, John Lavery and May Guinness. These differing sensibilities, one wistful and melancholic and the other bolder and more joyous reveals how specific qualities of light and place can enrich our perception of the landscape surrounding us.