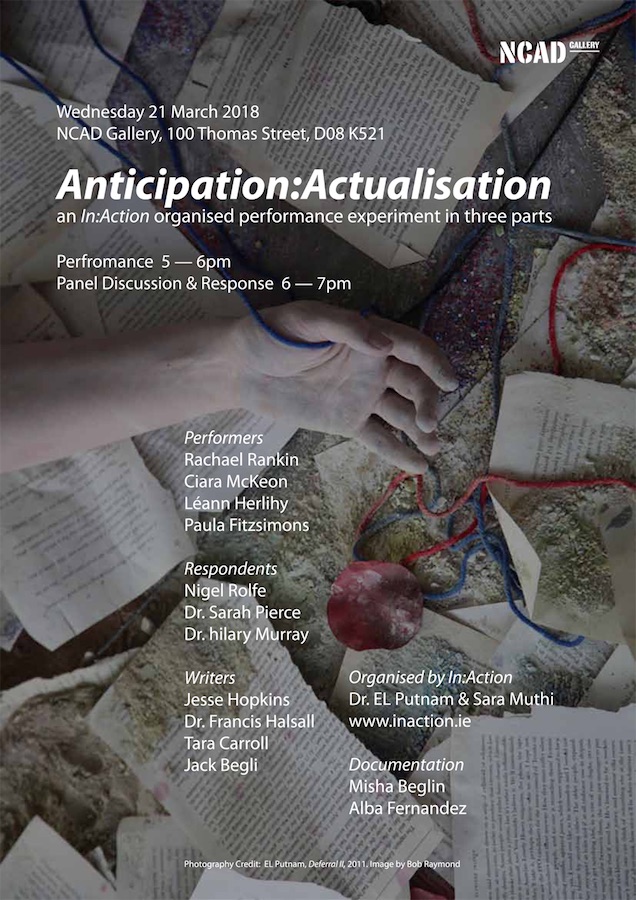 Anticipation: Actualisation is a three part event of  live performance, panel discussion and written response. This tripart event is organised by In:Action at the NCAD Gallery in collaboration with a wide range of artists, scholars and writers specialising in performance practice. This event aims to delve into the complex relationship between the performing body and specific materials, acting as a critique of the body’s dominance in performance art discourse.

The event is designed as an experiment without a predetermined conclusion though there are three designated outcomes; a one hour live performance by practicing artists, a one hour discussion panel in the Harry Clark Lecture theatre following the live event and three written responses to be published on In:Action (www.inacion.ie) one month later.

In:Action — Irish Live Art Review contains reflections and responses to live art created by Irish and Irish-based artists. Posts are gathered from invited guest writers as well as an ongoing open call. in:Action was developed by Níamh Murphy and EL Putnam, along with Sara Muthi as current editor and contributer. It acts as a site to cultivate discourse and a public platform for practitioners, curators, writers, and aficionados to share ideas about performance art in Ireland.

Dr. EL Putnam is an artist, scholar, and writer that lectures in Art Theory and History at Dublin Institute of Technology. Her performances explore the gestural interplay of the body with digital media. In addition to be the founder of in:Action, recent and upcoming publications include a survey of Irish sound art in Áine Phillips book, Performance Art in Ireland: A History (Intellect Press and Live Art Development Agency, 2015); a paper in the journal Performance Research that investigates national citizenship, performance art, and motherhood in Ireland (2017); and an examination of ageing and the female body through performance art in Ageing Women in Literature and Visual Culture: Reflections, Refractions, Reimaginings (Palgrave Macmillan, 2017).

Sara Muthi is a Dublin based writer & curator. Working primarily within concepts of performance art & its ontological aspects, she studied Fine Art Painting & Visual Culture at the National College of Art & Design. She is currently doing her MA in Art in the Contemporary World at NCAD. In addition to being managing editor for in:Action she had previously assisted in the curation of The Anti-Room (Artbox Gallery, 2015) while recent independent work include an accompanying essay for Homo Ludens (Man At Play) (2018) exhibition for Black Church Print Studios and curating The Public Diary (2018) for First Fortnight Festival 2018.