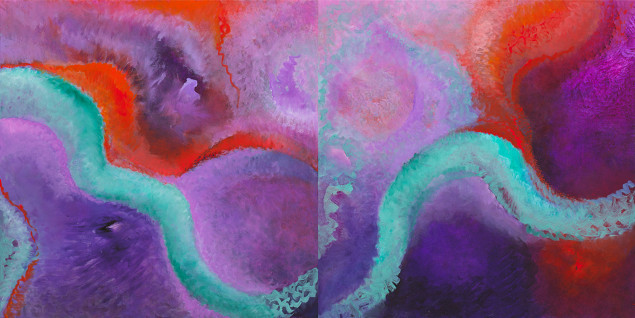 In recent years Anne Madden’s work has focused on an exploration of the Northern Lights, representing the visual phenomenon in ambitiously large polyptychs on linen and more intimate works on paper. Her paintings, both large and small, vibrate with colour as turquoise, lilac and yellow shapes snake across the picture plane to create ambiguous spaces depicting layers of light.

Anne Madden was born in London in 1932 and studied at the Chelsea School of Arts and Crafts in 1950. While travelling through Europe she met the painter Louis le Brocquy and in 1958 they married and settled in the small village of Carros, France. Madden lived in France for many years before returning to Ireland, where she now lives and works.

Anne Madden represented Ireland at the 1965 Venice Biennale and in 1986 she was elected to Aosdána. In 2004 she was conferred with an honorary degree by University College Dublin as part of its 150th anniversary celebrations and in the same year was made an Officier des Arts et des Lettres by the French Government. Throughout her career she has had over 50 solo exhibitions, most recently at the Burren College of Art Gallery, Clare; Centre Culturel Irlandais, Paris; Museum of Contemporary Art, Oaxaca; and New Art Centre Sculpture Park & Gallery, Wiltshire. Two major retrospectives of her work were held in 1991 and 2007 at the RHA Gallagher Gallery and the Irish Museum of Modern Art respectively. Her work is included in the public collections of the Arts Council of Ireland; National Portrait Collection, Limerick; Muséee du Louvre, Paris; State Art / OPW Collection; AIB; Smithsonian Institution, Washington DC; and Trinity College, Dublin, amongst many others.