Andrew Kearney: The Meaning of Nothing 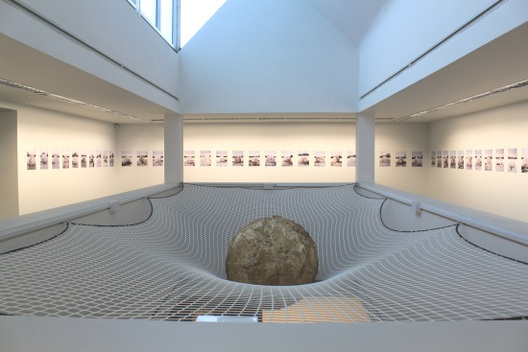 Being here, these things ‘are’ here in these spaces, encountered by visitors who come to them, who meet them in the building. Their being is experienced as the being of matter, of materials raw or processed or combined, and materials being affected by the immaterial. Relationships of being and knowing, of existence and knowledge are tested in the exhibition, as visitors are presented with materials in different states, with objects of various provenance, and are not given a clear map to locate these as entities with existence, or as objects of knowledge. There are nothings here, and there are meanings, and at the intersection of these is curiosity.

In this exhibition, Andrew Kearney contemplates oppositions. He elaborates what fills space, the seen and the unseen, what is means to ‘be’ in a space and where matter and the immaterial make up the whole. Not alone does Kearney ask the visitor to think about what lies between gaps, he also asks them to imagine the relationship between being and absence, between the object and the other, between the observed and the unobserved, between fluctuating meanings. What Kearney has consistently examined is the fluid state of knowledge, and the tension between materials and that knowledge. He proposes things that change in their function, meaning and sometimes in their ‘thingness’. Always challenging, it is on this highpoint for the articulation of Visual Art’s essence and for Limerick’s artists in particular, that Limerick City Gallery of Art is delighted to present this exhibition, along with a special text by writer and artist Mark Leahy.

Andrew Kearney was born in Limerick in 1961, and studied Fine Art at the Limerick College of Art and Design, and obtained an MA in sculpture Chelsea College of Art and Design. He won the Barclays Young Artists Award, Serpentine Gallery London, and the PSI Studios of Contemporary Art, New York, Fellowship in 1982. He has worked extensively in England, Ireland and Canada, on exhibitions and on public projects such as Heathrow’s Terminal 1 Pier 4A and Courtyard Project with South Thames College London. Most recently Tell me Something, for Limerick’s City of Culture, 2014 illuminates Limerick’s skyscape.