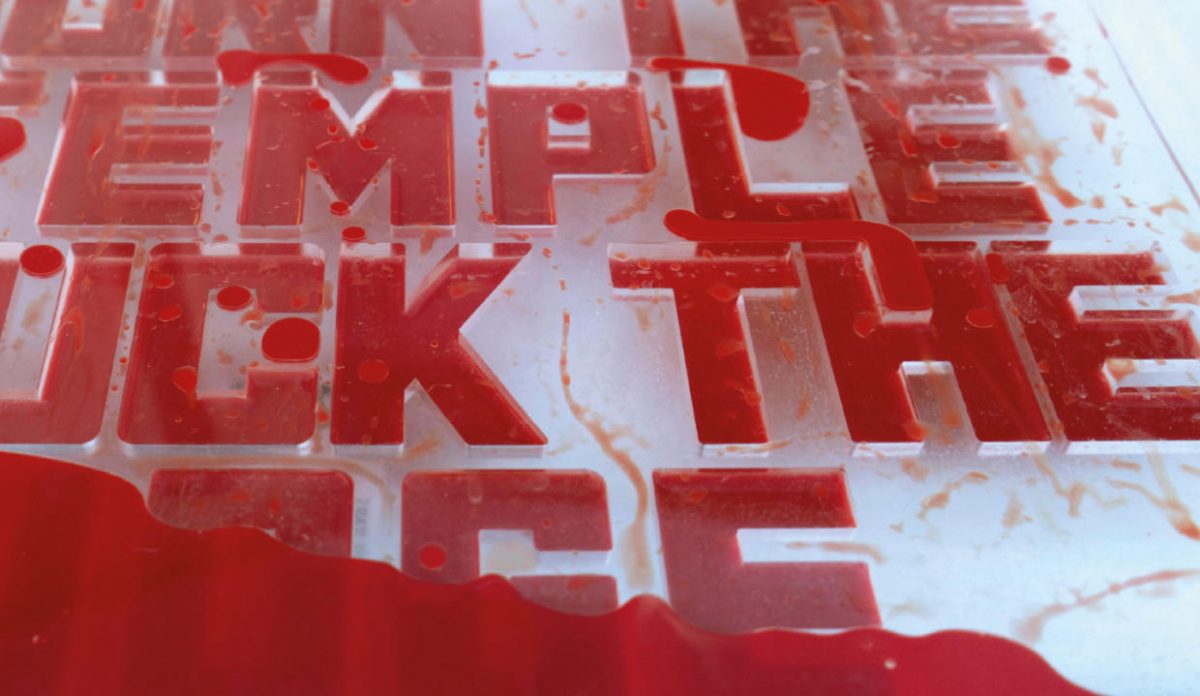 Andrei Molodkin’s ‘Bloodline’ marks the end of Rua Red’s partnership with a/political with a five-week intervention in the gallery. Evolving from the controversial work ‘Young Blood’ that saw Andrei Molodkin collaborate with prosecuted London Drill musicians at BPS22 Museum in Belgium (2019), this new work for Rua Red ‘Bloodline’ shifts focus away from music lyrics that European governments deem unsafe for popular consumption. Through the medium of human blood, Molodkin’s new work analyses the language used by different groups within the volatile political system.

Since October 2017 Rua Red has partnered with London based organisation a/political to bring some of the foremost socio-political artists to the island of Ireland Franko B, kennardphillips, Kendell Geers and Democracia to produce a unique and timely programme in response to Tallaght and its residents and to highlight the area’s most pressing socio-political concerns. Molodkin’s new exhibition adds its voice; his visceral and provocative installations highlight the power of political statements and makes those engaging with the work complicit in their directives.

Working between his studio in The Foundry near Lourdes, France and Tallaght, Dublin, Molodkin is producing a series of sculptural works which will be pumped full of human blood donated by individuals who wish to be part of the artwork. Conceived as an experimental studio laboratory, Molodkin’s dynamic exhibition will shift and change introducing new aspects of his enquiry throughout the five-week intervention.

a/political prioritises intellectual curiosity and informed discourse around social and political concerns through contemporary art and cultural practices. It encourages the exploration of radical knowledge, platforming voices that interrogate the critical issues and dominant narratives of our time. Through rigorous cross-disciplinary experimentation, a/political collaborates on large-scale projects previously thought unrealisable due to their scale, logistical complexity and/or subject matter. Projects are produced, exhibited and toured worldwide. In addition to the long-term project, a/political continues to acquire historical artworks for its collection. Based in London, with The Foundry, France.