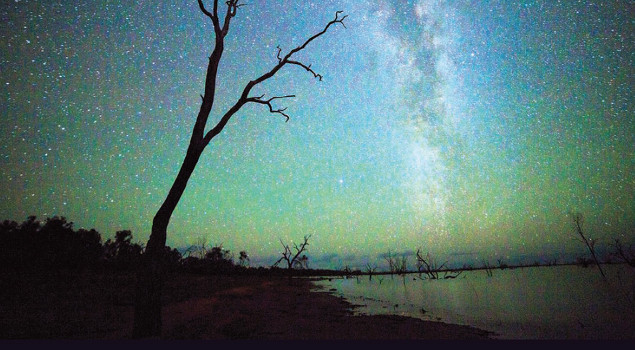 The Butler Gallery is delighted to present The Talking Earth by Amy Walsh, an artist who works primarily in video, photography and digital media.

The wonder of the night sky has been constant since the dawn of civilization. It has inspired countless generations of poets, scientists and artists. Amy Walsh has created two interrelated bodies of work that were photographed in artist residencies in New South Wales. Songlines was shot in the Shoalhaven area of NSW at The Bundanon Trust in December 2012and The Talking Earth was shot at The Broken Hill Art Exchange in the City of Broken Hill in the far west region of NSW in July 2014.

In these images, Walsh uses the night sky and the landscape to explore ideas of temporality and place. Drawing on elements of cartography, astronomy and the speed of light, the stars are used to represent both the present and the past. The work also references the indigenous use of the land and local stories. Songlines directly references the paths that cross the Australian landscape and sky within Aboriginal Culture. These paths are akin to maps and are marked by trees and objects within the landscape. When one stares at the night sky one is looking at the past. However, animation of the stars across the night sky makes the viewer aware of the rotation of the earth, which in turn highlights the temporal, the present and the future.

The Talking Earth photographs and video were made in the Outback in Mundi Mundi and Menindee, just outside the mining city of Broken Hill in the far west region of New South Wales. The title refers to the mining tradition of using the wood from local trees rather than steel to build mineshafts and structures. The trees were used because they would creak in warning if they were going to give away and the mine was going to collapse, which gave the miners time to escape. The locals referred to this creaking as ‘The Talking Earth’, which also relates to desert storms and droughts that have occurred in the region as a direct result of the deforestation within the landscape.

In the video works, each image or scene foregrounds a static element within the landscape against the night sky in the background. The camera, moving on a track around the subject, took a series of long exposure photographs, which were then animated. The video traces the movement of the stars against the night sky showing the trails or paths that they make. Two time signatures are present, the first being that of the stars moving across the sky and the second being that of the camera moving through the landscape. The installation of the projected video works includes a mirrored floor where the images are reflected downward and multiplied.

For the most part we live in areas where the glow from city lights obscures much of the brilliance of the night sky. Amy Walsh, through this skillful and accomplished body of work, transports us to the Australian Bushland under the darkest of night skies to observe and appreciate the clarity and animation of the sky at night. It truly is a thing of beauty.

Amy Walsh (1982) lives and works in Dublin. She received a Post Graduate Diploma in Learning and Teaching from DIT in 2011, MSc in Multimedia Systems, Trinity College 2005-06, and a BA in Fine Art from the National College of Art and Design, Dublin 2000-2006. She works as a lecturer in Fine Art at the School of Art Design and Printing at Dublin Institute of Technology. Walsh has been included in many group exhibtions internationally and has had solo exhibitions at the West Cork Art Centre, 2011, Market Gallery and Studios, Dublin 2009, The Stone Gallery, 2008, Monstertruck Gallery and Studios, Dublin 2007 and has exhibited widely in Australia. She has participated in many Artist-In-Residence programmes in Ireland, Newfoundland, Iceland and Australia. She has received several Arts Council of Ireland grants and was awarded ‘The Hilla von Rebay International Fellowship from the Solomon R. Guggenheim Museum in 2007.

*Discovery Pens will be available to visitors, giving access to additional audio information. This is facilitated in partnership with Arts & Disability Ireland, with funding from the Arts Council.

With thanks to the Arts Council for essential annual funding and to the OPW, Intreo, The Heritage Council and Kilkenny Local Authorities for additional assistance.