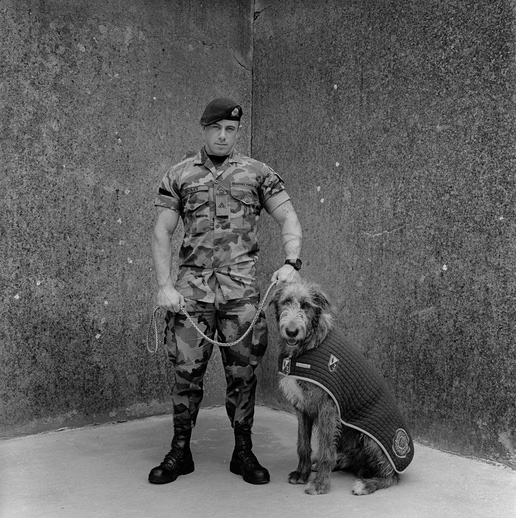 Working with members of the Defence Forces from the 3 Inf Bn, based in James Stephens Barracks, Kilkenny, the photographer Amelia Stein has produced a body of work that is both a visual inventory in the medium of traditional black and white photography, and a portrait in time, that seeks to represent the diversity of those men and women who are currently serving or have served within the walls of the Barracks. Highlighting the assortment of skills and diverse employment required to sustain a vibrant military unit and Barracks, this visual exploration was influenced by the work of the photographers August Sander ‘Face of our Time’.

The Handball Alley, within the Barracks, provided a daylight studio and a private space where the portraits were made. A number of visits were arranged over the years from 2015 to 2019, as the project developed and the breath of the work was realised. Military training prepares soldiers to stand with confidence and pride for tasks such as ceremonial duties. This characteristic was brought to the work by each individual who stood before the camera.

The Exhibition, comprising 58 portraits, is titled ‘The Bloods’ the name associated with the 3 Inf Bn. Founded in Donegal, the 3 Inf Bn is the only military unit to have consistently remained on military establishment tables since 1923, and is thus recognised as the oldest and most senior unit of the Defence Forces.

Images portray roles such as the Sniper, Medic, Mechanic, Chef, Piper, Barber, Hurler, Machine Gun Operator and Veteran. Those depicted range from the Commanding Officer and the Sergeant Major, to new Recruits, and include Fionn, the Wolfhound Mascot of ‘The Bloods’ and his Handler. Looking at these images we see the culture of the Defence Forces and are given unique insight of the ‘village behind the wall’ that is James Stephens Barracks; an integral part of Kilkenny City.

In addition to honouring our Defence Forces, this body of work pays tribute to one of the Evans’ Home previous uses as a military barracks and will act as an important opening exhibition for the Butler Gallery at Evans’ Home and for the people of Kilkenny.

Elected a member of the RHA in 2004, Aosdána in 2006, the Photographer Amelia Stein’s black and white photographs pursue character and the constituent elements that create them. Absence and the passage of time is a recurring theme .Described as a portrait photographer, her work is not confined to the figure or facial studies but the wider meaning of portraiture, from the conventional face to the breath of wider open landscapes, from small intimate details to the landscape on the grand scale. Though meticulously composed in the camera her practice gives equal emphasis to the subtleties of the darkroom and meticulous attention to detail in printing. Work is represented in the collections of The National Gallery of Ireland, IMMA , the Arts Council of Ireland and have been on view in solo and group shows in both Public and Private venues to the present day. Formerly as a performing arts photographer, Stein worked in Theatre and Opera in Ireland 1979-2000. Currently she divides her time between Dublin and North Mayo.