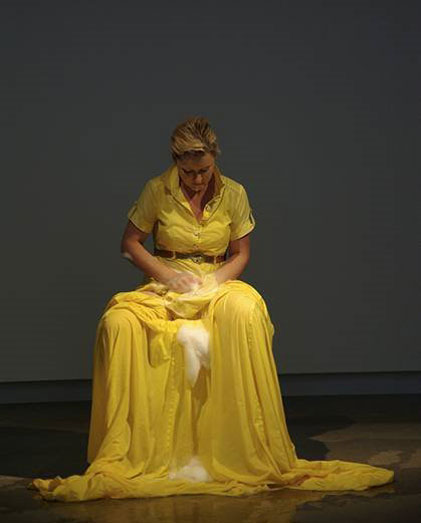 Amanda Coogan is at the vanguard of live performance from the Visual Arts in Ireland. The centrality of Coogan’s practice is durational live performance. Her powerful live events are fundamental to her videos and photographs. Coogan’s expertise lies in her ability to condense an idea to its very essence and communicate it through her body. Coogan was awarded the Allied Irish Bank’s Art prize in 2004. She has performed and exhibited her work both nationally and Internationally including The Venice Biennale 03, Liverpool Biennial 04, PS1, New York, Galeria Safia, Barcelona, The Irish Museum of Modern Art, Dublin, Royal Hibernian Academy, Dublin, Van Gogh Museum, Amsterdam, Centre Culturel Irlandais, Paris and MARTa Museum, Herford. In 2005 Coogan published the first monograph on her practice, A brick in the handbag in conjunction with her solo show at Limerick City Gallery of Art. In 2008 Coogan performed Yellow for 6 days at the Artists Space Gallery, New York and last year she made her seminal durational performance, The Fall, over 17 days at the Whitworth Gallery of Art, Manchester for the Manchester International Festival’s acclaimed exhibition Marina Abramovic presents… . Coogan curated the first live performance based exhibition in Ireland, Accumulator, for Carlow’s new Center for Contemporary Art, VISUAL.