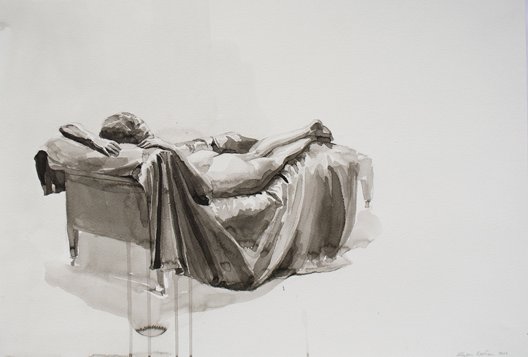 Poised, elegant and sophisticated; Keehan’s depiction of the nude harmonises the academic tradition with gentle intimacy. Through the medium of Indian ink on paper, she gives a fluid lightness to the subject. Controlled and deliberate brush marks are juxtaposed beside happy instances of drips and bleeds, with watermarks giving life and movement to the subjects. The drawings are taken beyond the study of the human form and the models expression and identity come to life. Life drawing is seen as one of the enduring and most difficult themes in visual arts. Keehan’s approach is both expressive and considered, a complimentary extension of Keehan’s other work in oil paint.

Born in Limerick in 1978. Keehan graduated from Byam Shaw School of Art (University of the Arts London) in 2004 with a MA in Fine Art, after completing a BA(Hons) Fine Art Painting in 2002 from Limerick School of Art and Design. Keehan has exhibited widely including London, Berlin and extensively through Ireland, including solo shows ‘Shimmeriing Synthetic Appearances; I Want To Put You Back In’ at Queen Street Studios Gallery, Belfast in January 2012 and ‘Lookie Likie; Mimetic Protagonist’ at The Molesworth Gallery in 2011. Keehan won the Merit Award in The Golden Fleece Award 2012. She is exhibiting in this years RHA Annual, and in January 2012 she started a six month residency in the RHA Studios. In 2010 Keehan undertook a residency in Takt Berlin. She now lives and works in Dublin.