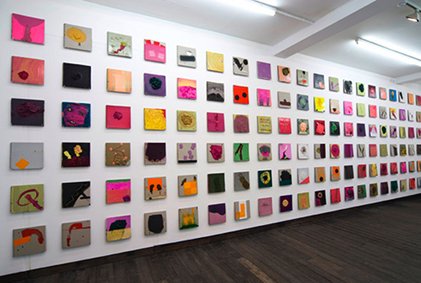 This exhibition presents new Tondo paintings, sculptures and over 60 works on paper from London based artist Alexis Harding.

“As the filmy surface of the grid slid over its unstable, monochromatic matrix Harding was able to show entropy at work in what was understood as a stable screen through which to view and make sense of the world”. On Depthplunge, Chris Townsend, Oct 2007

For over six years Alexis Harding used the plain cardboard covers of a 2003 catalogue of his work as drawing boards and depositories for the bi-product of his studio practice. Numbering 120 at the outset, these studies will be installed on a single wall at Rubicon Gallery this month. Collectively they act as companions to paintings made subsequently, and they provide a unique insight into Harding’s thoughts and working processes. In the beginning the catalogue covers were grounds for repeated actions such as the sieving of paint from failed paintings and cleaning the brush. Over time, a visual language evolved describing the real time of the studio, the attempt to give an order to its disorganisation and to its Modernist residue. Recurrent motifs create a schematic illusionism – paint balls, towerblocks, Islands, horizon lines, paint detritus, days of the week, paint boulders, anthropomorphous perching gestures, paint growths, heads, neglected aerial vegetation, paint excavation, signposts.

Harding’s exhibition will also feature new Tondo paintings and two sculptures titled Absorbency retreat. The paintings mark a move away from the grid-like central motif characteristic of his earlier work where there is a continued exploration of control, failure and contingency in the making of this work. The objects are sculptural residues from the paintings, made or accumulated over years alongside the paintings.