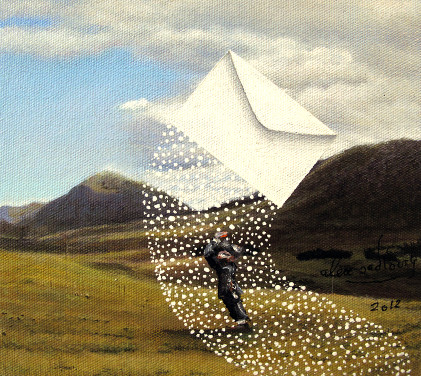 Taylor Galleries is delighted to present 103 Small Paintings, One Big Thought by Swiss artist Alex Sadkowsky. This is the artist’s first solo exhibition with Taylor Galleries since 1983.

The exhibition comprises of 103 small paintings in oil on canvas mounted on board that Sadkowsky has completed over the past ten years. The paintings read like a surreal diary – fragmentary thoughts and visions become signs and symbols expressed in various visual idioms that are repeated, regenerated, reused until they are cast aside to make way for the next idea. Here a rhinoceros in the wild sports a human mouth and eyes, a piano exists as an impasto-heavy kaleidoscope of colour, disembodied legs clothed in smart trousers and patent leather shoes circle around a head of lettuce and two sausages nestle next to a kidney-shaped palette while love letters spiral through clear skies.

Born in Zurch in 1934 to Russian and Greek parents who worked as portraitists, art restorers and painters, Alexander Sadkowsky spent time as a jazz musician, washing machine and razor blade salesman, Spanish teacher, tapdancer and prizefighter travelling through India and Europe before first coming to Ireland in 1963. Following a chance meeting with Francis Bacon in London, he found himself drawn to the birthplace of writers W.B. Yeats, George Bernard Shaw, James Joyce and Samuel Beckett through their work and he spent time in Dublin during the first of over 70 visits writing his début novel, The Great Wasp – A Love Story, in 1963. Throughout his career Sadkowsky has combined his literary pursuits with painting, filmmaking and performance. He has exhibited widely throughout Europe, most frequently in his native Switzerland, and continues to publish his writings, travel and make films from his base in Zurich.