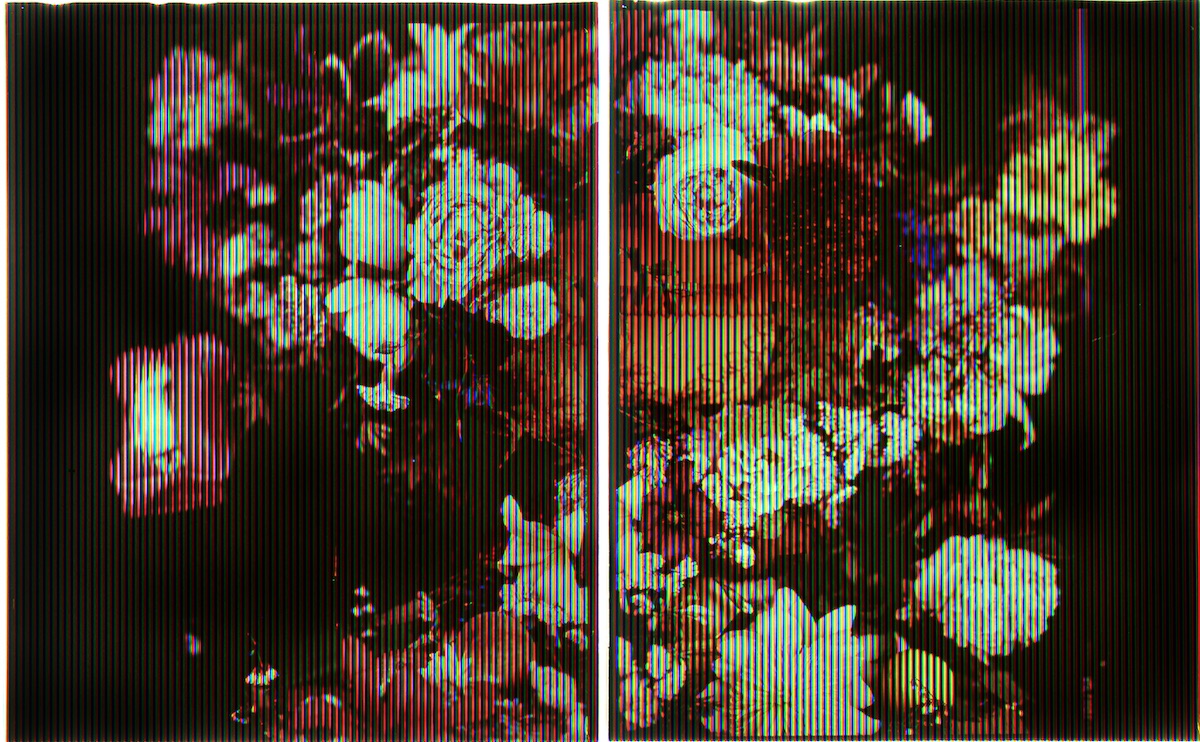 This exhibition brings together a selection of Alan Phelan’s unique Joly Screen photographs and a new large scale music video work about the inventor of this forgotten colour photography process which was abandoned from use over 100 years ago.

Over the past three years Phelan has worked on reviving the process, invented in the 1890s in Dublin by John Joly, a physicist and geology professor from Trinity College, Dublin.

Phelan’s ambition is to create a visual history for the process that it never had. To do this he uses art and historical references spanning over 500 years. The work presents a “counterfactual temporality”, to create a longer potential history for photography.

The photographs comprise of two parts – the sheet film from a large format camera and a colour screen, printed onto clear sheet. The Joly process is not a chemical dye coupler or inkjet but instead filters light to create colour, on exposure and then on display. The screen is made up of red, green and blue stripes, giving the photographs a very distinct appearance. The small images have the intensity of painted miniatures, illuminated by LED panels, slowing down the viewing of a photograph as well as allowing for a unique colour shift that happens on display.

Phelan also engages different installation devices on walls, windows and lighting to reference the process as well as narratives from a wider art history of painting and sculpture. He frequently collaborates with others in making work and in this case has worked with members of the Dunboyne Flower & Garden Club in making the floral images for this exhibition. For Phelan this is an opportunity to expand his interest in participatory practices – art making that involves working with others to expand the notion of authorship into a shared activity one where meaning remains unfixed and creating agency as well as new knowledge in the process.

Similarly he has worked with a variety of talented artists and musicians for the video who include Elaine Hoey, James Kelly, Ian McInerney, The late David Turpin, and Louis Haugh. The video brings the analogue stripes of the Joly Screen into the digital age with audio-responsive animations which overlay a troubled biographical narrative about John Joly and his collaborator Henry Dixon. Typical of Phelan the story presented is a fusion of references coming from texts by Samuel Beckett and Jean Genet and functioning outside of adaptation or appropriation to “re-narrativise” instead and create a new or different story history.

The photographs in Folly & Diction are arranged in sequences that mix floral, self-portraits and objects, with titles acknowledging source artists and related historical events. The show title embeds Joly & Dixon into this speculative history by homonym, while acknowledging the possible humour in these probable revised histories and queer re-reading of photography.

His solo exhibition for IMMA in 2009 also had versions at Chapter, Cardiff and LCGA, Limerick. Public art commissions include works for Dublin City Council, Dublin South County Council, St Michael’s House Special National School Raheny and the Dept of Communications. For studies in the USA he received a Fulbright Scholarship and John F Kennedy Fund Scholarship and has received several awards from The Arts Council, Culture Ireland, and Creative Ireland. His work is included in the collections of the IMMA, TCD, LCGA, The National Self-Portrait Collection, the OPW, and several private collections. He is currently the NCAD School of Fine Art Artist in Residence for 2019-20.