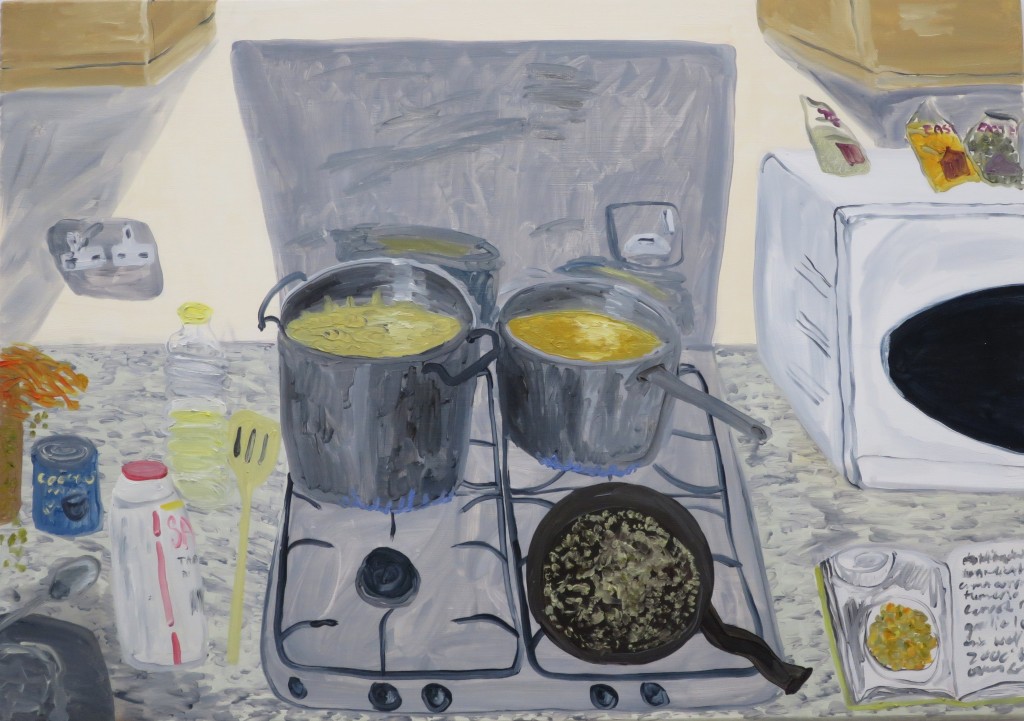 In response to the question ‘why paint?’ featured in the January 2014 issue of frieze magazine, artist Ellen Altfest specified, ‘Looking over a long time is like an attempt to merge with something outside of oneself. The dense accumulation of visual information, which is the product of this kind of looking, is different from how the lens and the eye usually see the world.’

Through the activities of walking and looking Kathy Tynan identifies alternative landmarks in the city, places to rest the eyes that give rise to contemplation. Tynan observes and informally records visual quirks in her surroundings and such vagaries are later bestowed with temporal emphasis through the medium of paint. In the cracks of a pebble dashed wall and across a surface of uneven plaster, real word surfaces and textures appear elevated through keen observation. Slogans and symbols scrawled or sprayed across gable ends, crows looking on, trinkets in a stranger’s porch; all distract from the path ahead.

Aileen Murphy’s canvases are lurid and brassy with strong sweeping brush strokes that evoke activity and dance. Energy takes precedence as the painted image is contained but always threatens to breach the border of the canvas, a yellow interior emblazoned by broad swathes of blue paint depicts an athletically contorted woman mid-pirouette or falling. Murphy works from swiftly made drawings creating seamless gestures of movement. They are ‘feeling’ rather than ‘thinking’ paintings that are concerned with human emotion and the human condition in which tales of drama and lust abound.

Both Murphy and Tynan paint in a way that is frank and full of integrity, in which humour alternates with genuine pathos. Hands Laid On comprises paintings that relate to one another in a manner that is both reciprocal and divergent.

Kathy Tynan (b.1984) graduated with a BA in Fine Art Painting in 2008 from the National College of Art and Design. She returned to NCAD to complete an MA in Art in the Contemporary World. Tynan has exhibited in many group shows. Recent exhibitions include The Future is Self Organised, LCGA, Limerick, 2015, Buff, Sim Gallery, Reykjavik, 2015, What is And What Might Be, Highlanes Gallery Drogheda, 2015, Panorama, Pallas Projects, Dublin, 2015 as well as a solo exhibition; The Sky is All Changed, Hendrons Collider, Dublin, 2014. Tynan’s work is held in many notable public and private collections.

Aileen Murphy (b.1984) graduated with a BA in Fine Art Painting in 2007 from the National College of Art and Design. She is currently embarking on an MA at the highly regarded HFBK Städelschule in Frankfurt. Murphy has participated in a number of group shows including Stuffing. Johan, Frankfurt, 2015, Here and Now, Greenacres, 2015, Panorama, Pallas Projects, Dublin, 2015 as well as solo exhibition; Guano Fruit, Ormond Studios, Dublin, 2013. Aileen Murphy has participated in numerous residencies and collaborations including Soft Blonde Moustache, a Dublin based drawing collective. Murphy will show with 321 Gallery, New York in January 2016.