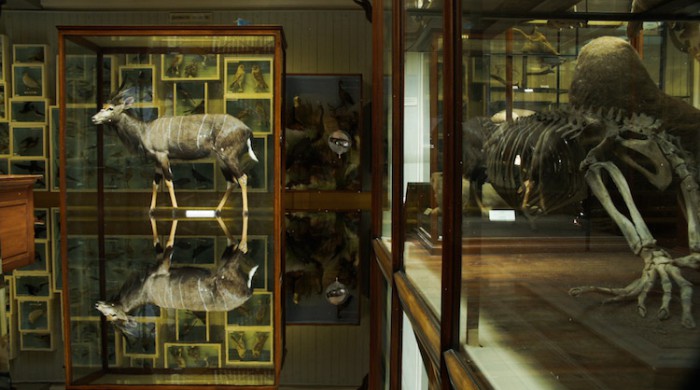 Reports to an Academy is a new four screen video installation by artist Ailbhe Ní Bhriain. Ní Bhriain is known for her virtuosic video montages. Her seamless knitting of the moving image has led her to create surreal and haunting scenarios. This is her most ambitious project to date, filmed on the Aran Islands, in the Natural History Museum, Dublin and in disused art school studios and libraries. Rhyming all of these locations together is an exploration of displacement. Elements spill from one location to another in unlikely ways, suggesting a new and permeable sense of place.

The work takes its title from the Kafka Short Story, ‘A Report to an Academy’, in which an ape recounts his transition to a human identity as a means to survive his captivity.   Here, the archetypal Irish landscape, the natural history museum, the library and the studio are re-imagined to resemble stages, in which identities might be constructed and false realities forged.

The installation will be an immersive experience consisting of four large video screen projections.

Ailbhe Ní Bhriain is a Cork based artist who workswith video and sound. She creates immersive multi-screen installations and has exhibited widelyboth nationally and internationally. Recent and upcoming exhibitions include: Thin place at Oriel Myrddin, Carmarthen, Wales, 2015, Plymouthcontemporary Open at Peninsula Arts Gallery, UK, 2015, l’Oeil d’Oodaaq at Musée des Beaux–arts de Rennes & La Ville en Bois, France, 2015,Droghedaarts Festival, Co. Louth, 2015, sounds from a safeHarbor, Cork, 2015 and Reports to an academy at Domobaal, London, 2016. The work has increasingly involved collaboration with musicians and composers, including Kaija Saariaho, Linda and Irene Buckley and Stephen Gardner, with screenings and installations incorporating recorded sound, live performance and improvisation. Her current work is supported by a Visual Arts Project Award from the Arts Council of Ireland, Sounds from a Safe Harbor Festival and Cork City Council. Ailbhe is represented by Domobaal Gallery, London and lectures at the Crawford College of Art & Design, Cork.