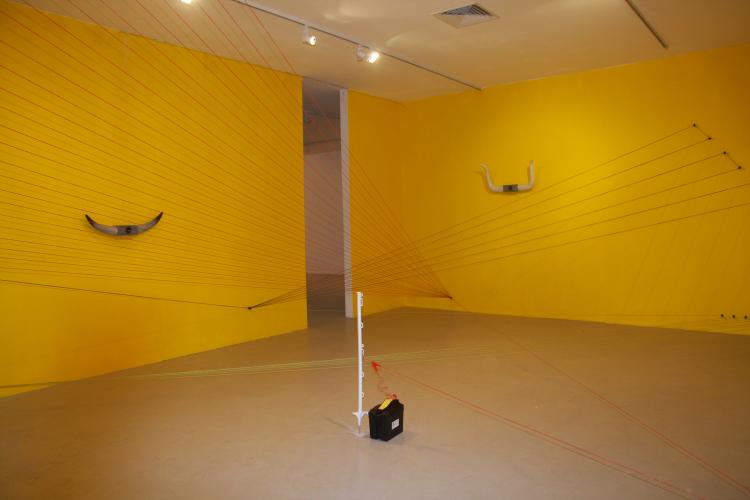 Agri_Culture and Art & Agriculture II and are two research-based residency projects involving collaborative engagement between artists and diverse agricultural contexts found both locally and around the world. The projects have emerged as an exploratory partnership between Roscommon Arts Centre and the Leitrim Sculpture Centre, based in Counties Roscommon and North Leitrim.

Wilderness In Modified Landscapes is a research-led exhibition of new sculptural work by Simon Carman and Helen Sharp made in response to their time on residency with Roscommon Arts Centre. Abstracting the landscapes of the River Suck callows and limestone agricultural lands of County Roscommon, Carman and Sharp have developed a conversation of art works in stone, text and electric fencing.

Researching via field trip and historical record and detailing visual incidents from the local agricultural mart, Carman and Sharp offer up a visual articulation of some of the physical and philosophical intricacies of the ground between agricultural practice and wilderness process and the position of man and beast in both.

In The Milk Well and the Tea Well, O’Connell centers her research on the theme of memory / preservation in relation to the historical significance and value of local co-operatives or creameries to current rural economies set in the context of north County Leitrim.  O’Connell’s trans-disciplinary practice explores issues of community and social identity by drawing on history and trace memories to evoke ways in which we might better place rural lifeworlds as directly experienced by individuals, subjectively, in and through their everyday life and work.

Simon Carman lives and works in County Fermanagh and has been a studio holder at The Leitrim Sculpture Centre for many years, predominantly working in stone, bronze and collage. As well as exhibiting widely, his work is also held in a number of private collections. He attended Glasgow School Of Art following a foundation at NCAD.

Carman has worked in professional foundries as well as within a community arts context and has in more recent years become sought after to make sacred objects including a St Patrick for St.Patrick’s Church facade, Milltown and a fabricated Bronze Crown for a new Buddhist Stupa at Jampa Ling, Ballinamore and has just been asked to make a new large-scale St Patrick for St Patrick’s Parochial Centre, Cavan.

Pauline O’Connell lives in north Co. Kilkenny, Ireland. She studied sculpture, photography and mixed media at DLIADT graduating in 1992 and was awarded a First Class honours Masters Degree – MA-SPACE in LSAD in 2012.

Her public art projects include Four Roads to Glenamaddy – The Cake Dance, Roscommon 1995; 100 Years of Austrian Cinema, Vienna 1996; The Orchard Waterford, 1999; Regeneration, Sligo 2000; The Plain of Silver Wood, Kilkenny 2003; Drawing The Water, Kerry 2012 and Heave-Ho [An invitation to Community / Pub Pulling League], Kilkenny 2012. Since 2012 she has been working on a long-term project; The Community Field, centered on a communally owned 2-acre field set in the rural uplands of north County Kilkenny.

She has exhibited in The Crawford Gallery Cork, curated by Iwona Blazwick (Whitechapel, London); AART in The Irish Museum of Modern Art Dublin, curated by Gary Phelan and Mark Mc Loughlin; Delicate Tissue in M.Y. Arts Prospects New York, curated by Jennifer Kotter at L’ecole des Beaux Arts, Paris, invited to represent Ireland by SSI now Visual Artists Ireland and more recently she was invited to present a project in conjunction with The University of Sousse, Tunisia at the Waterwheel Symposium.

Helen Sharp was raised on the southerly most inhabited island in the Outer Hebrides and left the islands to take up a place in Edinburgh College of Art where she gained a First Class honours in Sculpture, receiving the Andrew Grant Bequest Scholarship for Highest Academic Achievement. She went on to gain a Masters with Distinction in Time Based Art from Dartington College of Arts and completed a PhD from the University of Ulster.

Sharp co-founded Outland Arts, an artist-led collective with its heart in the rural and was invited by The Happy Days International Beckett Festival to curate an experimental music event Dark At Its Fullfeaturing Seamus Harahan, Dr John lamb, Ciaran Maher and Dr Catherine Laws. Sharp recently exhibited 3 works for Horse at Void, Derry and was artist in residence at The Model, Sligo and is currently exhibiting at Island, G39 gallery in Wales.