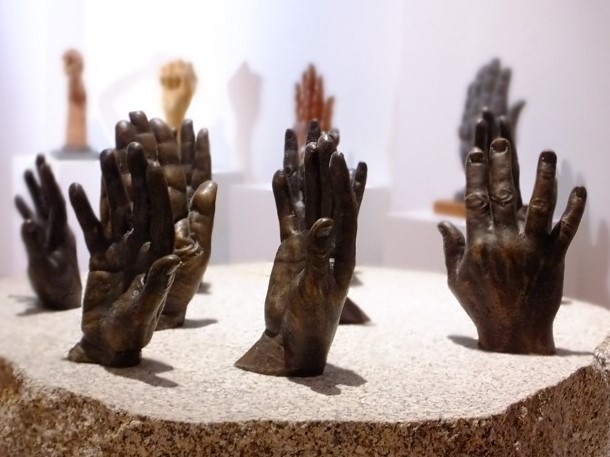 The Belfast or Good Friday Agreement (GFA), was an important milestone in the Northern Ireland Peace Process. To mark the twenty years since it was signed, this exhibition examines the role of art as an aid in conflict transformation, reflection and peacebuilding.

Shortly after the signing of the Good Friday Agreement, the artist Raymond Watson managed to persuade politicians involved in negotiating the Agreement (some of whom are now deceased) to allow him to take a cast of their hands to create a unique sculpture entitled Hands of History. The work includes bronzes of the hands of Gerry Adams, Mo Mowlam, Bertie Ahern, Tony Blair, John Hume, George Mitchell, David Trimble and others who led the peace process, alongside the cast hands of those who continue to advance peace-building, including Monica McWilliams, Peter Robinson and the Rev Harold Good. Raymond‘s Hands of History is a powerful, significant and truly unique artwork that captures a momentous and historic event in Irish history.

Hands of History is accompanied by two new installations by Raymond Watson that combine rare historical items with digital technology to produce immersive and thought provoking artworks. The artefacts include an original prison-made grappling hook covertly crafted and hidden by prisoners at Long Kesh/Maze prison in the early 1970s. The artist brought the hook to Belfast’s Peace Wall, a 25 foot high structure that divides communities, and used it as the centrepiece of an audiovisual exploration of the struggle to escape both the wall and the sectarianism it represents. The second installation utilizes the actual keys from the cells at the Crumlin Road Gaol, Belfast, in a walk-through sound and visual experience that attempts to explore the past’s power to imprison, while also exploring the possibilities of unlocking and of setting free.

Alongside the works by Raymond Watson, Agreement: The People’s Progress explores the past through the use of video, photographs and craftwork.

Lyrical Agreement includes excerpts from the Belfast/Good Friday Agreement read aloud by people of all ages living in Belfast. The voices are both those who lived through conflict, and those who have known more peaceful times.

Invitation to Observe, curated by Pauline Hadaway, presents seven remarkable works that bear witness to, and reflect on, the experience of conflict and conflict transformation. These photographs create a journey through international conflict resolution using photographs by British, Irish, Argentinean and Colombian contributors. Highlights include Frankie Quinn’s Interface Images, Chad Alexander’s Entries and LCpl’s Stan Holman’s collection. Invitation to Observe is an intimate and emotional journey through the landscape of the city exploring the personal impact of conflict on both victims and serving officers in the British Army.

The exhibition will also include memorial quilts which commemorate those from all walks of life who were killed during the Troubles. Individual quilt patches contain symbols that are personal to those remembered, and have been created by the families of those who died and a team of volunteers.

The artworks brought together in this unique exhibition will resonate with the people of Belfast, as they reflect the many, varied experiences of those who lived through the Troubles as well as those who have grown up or moved to Northern Ireland during the last twenty years.

This exhibition was initiated by the Institute of Irish Studies in Liverpool, a world leader in promoting the understanding of peace building and conflict resolution, working alongside the ArtisAnn Gallery in Belfast.