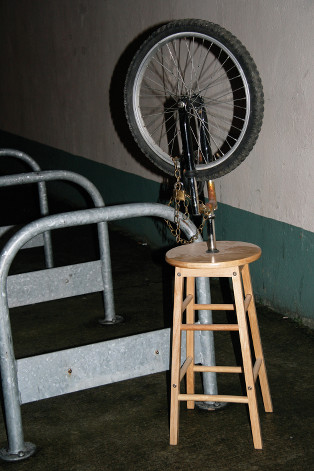 Opening Reception Wednesday 15 January at 6pm • At 5.30pm the artist will be in conversation with Emma Lucy O’Brien, VISUAL Centre for Contemporary Art, Carlow • Curated by Michele Horrigan

In December 2013 Faber Studios closed in Limerick City, with six studio members losing their place to work along with a public exhibition space. While artists in Limerick are aware of the impermanent and precarious nature of studio spaces in the city, the blow to Faber Studios was a bittersweet one – with six million euro injected into the region as part of 2014’s Irish City of Culture, a prominent and active creative space closes from resulting property speculation.

This is a story heard many times before, in numerous other locations. As ever, the conversation will continue to spiral around the neo-liberal rhetoric of bureaucracy and middle-class attitudes to the creative industries (“what exactly do they do in there?”). Very little is made of the role of individual artistic practices in this discourse, as it is instrumentalised as a cog in a much larger wheel of infrastructural development. In The Möbius Strip, Aaron Lawless’ first solo exhibition, he examines how this scenario directly affects his own artistic production.

For several years Lawless used Faber Studios not only as a studio space, he also developed a storage area there that accommodated Eva International, Limerick City Gallery of Art, the Belltable Arts Centre and Occupy Space, all resulting in a variety of leftover and recycled material salvaged from around the city. This included pieces of previous exhibition infrastructures, furniture, outdated audio-visual equipment and a variety of bicycle parts received from An Garda Siochana. In turn these materials formed sculptural arrangements, used as discursive touchstones for participation through active conversation, organised public events and, in the artists’ words, “a form of interpersonal play that challenges the notion of a stagnant relationship between individual and artwork”.

Now out of his studio, Lawless’ work accelerates, and it appears as if everything is spilling out of his own private space into public view… a salvaged partition wall from Limerick City Gallery of Art is used to build a scale replica of the final scene of Roddy Doyle’s The Van, where a fast food van at the centre of a business dispute between friends is driven into the sea so as to begin their friendship afresh. One cent coins held by inflated balloons will gradually drop to the ground during the exhibition run, inviting all to take the money. Loyalty coffee cards for McDonald’s are never redeemed; instead they are collected and arranged on the gallery wall. A remake of Duchamp’s Bicycle Wheel is chained onto railings in the city…

In Lawless’ ideology there are no leftovers, only possibilities for further use value. Aware of the constant shifting ground of cultural practice, Lawless’ work adapts to the very territory around him. Consider this exhibition his form of feedback, his evaluation of its’ Strengths, Weaknesses, Opportunities, and Threats.

Aaron Lawless’ work has been previously presented in exhibitions such as Undercover: A Dialect at VISUAL, Carlow (2013), and Eva International (2012), and he has completed a public art commission, What’s A Little Fallout?, as well as a residency with Askeaton Contemporary Arts (2013).