A Question of Attribution: The Arcadian Landscapes of Nathaniel Grogan and John Butts 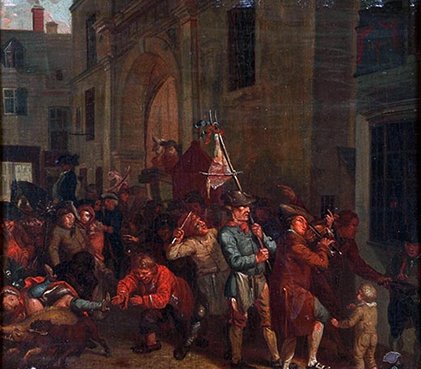 The Crawford Art Gallery is presenting an exhibition of work by John Butts (c.1728-1765) and his pupil Nathaniel Grogan (c.1740-1807), both of whom lived and worked in Cork. Both artists lived a precarious existence, although they produced many fine paintings. They recorded fascinating aspects of Cork’s social and economic life in the eighteenth century.The paintings of Grogan and Butts are often similar in style, and over the years there has been much discussion amongst art historians, as to the attribution of works to these artists. In 2005, one of the most important paintings in the Gallery, the View of Cork, for many years thought to be by Grogan, was re-attributed to Butts. There is still debate about who painted this panoramic view of the city around 1750, and this will be part of the exhibition’s theme, to look at the evidence presented, for and against attribution to a particular artist. In addition, works previously thought to be by George Barret and Thomas Roberts are now thought to be by Butts.The son of a carpenter, Nathaniel Grogan was born in Cork around 1740. His views of Dripsey, Healy’s Bridge and Blarney are fascinating records of landscape, as well as local industries such as iron working and paper making. Grogan also painted a decorative ceiling in Vernon Mount house, as well as producing a set of aquatints of Cork in the 1790’s. Very little is known of the life of John Butts. Born around 1728, after training as an artist and working in Cork, he moved to Dublin in 1757, where he painted sets for the theatre. He died in poverty in 1765.

There has never been an exhibition that addresses the attribution of works to these two artists. Prompted in part by the recent acquisition of Grogan’s View of Sullivan’s Paper Mills at Dripsey, the Crawford Gallery sets out to remedy this by presenting some of Grogan’s best-known paintings, and comparing them to known works by Butts. A centerpiece will be Grogan’s Boats on the River Lee below Tivoli, (National Gallery of Ireland), which will be re-united for the first time in over a century with its four companion pieces, showing views of Blackrock Castle, Tivoli and the Lower Glanmire Road.

Lenders to the exhibition include the National Gallery of Ireland, the Irish Heritage Trust (Fota House), University of Limerick, the Office of Public Works and private collectors. A catalogue will be published to accompany the exhibition, with essays by Tom Dunne, Mary Jane Boland and William Laffan. The exhibition is curated by Peter Murray, assistant curator Elena Rossi.