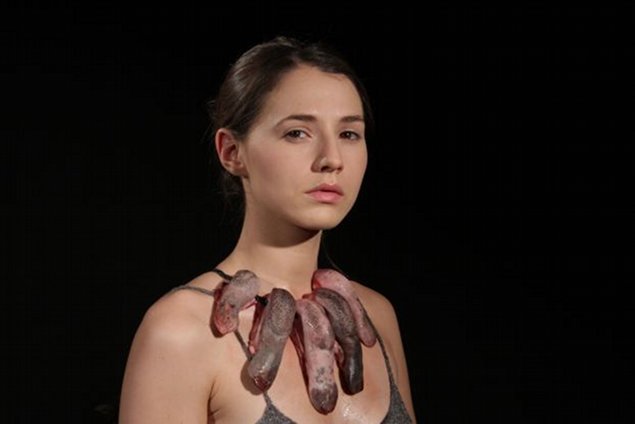 A major mid-career retrospective of the work of leading Irish artist Alice Maher opens to the public at the Irish Museum of Modern Art’s temporary exhibition spaces in Earlsfort Terrace on Saturday 6 October 2012. Becoming charts the development of Maher’s practice over 25 years, from her early drawings, paintings and sculptural works, to a new film work specially commissioned by IMMA for the exhibition. The title points to the evolutionary processes which are at the heart of many of Maher’s individual works and which inform her entire practice. The layered history of the Earlsfort Terrace building, as a university and a former seat of government, and its labyrinthine nature have also influenced the presentation of the exhibition, with works from different periods occupying the same spaces, creating new associations and illuminating recurring themes.

Becoming illustrates the particular philosophical arena in which Maher places her oeuvre, where things are constantly in flux or are caught at a moment of metamorphosis. Through painting, drawing, sculpture, installation, photography and video and digital technology, she uncovers ever more complex readings of the world around and within us. The exhibition includes two new works: Cassandra’s Necklace (2012), a major film work inspired by a script sent to the artist by the award-winning Irish writer Anne Enright and a site-specific installation L’Université (2012), which addresses the history of Earlsfort Terrace as a place of learning. Cell, Maher’s iconic ball of thorns first shown in Kilmainham Jail in 1991, is being re-staged.

One of Maher’s most enduring devices, the shifting of scale can be seen in her well-known early piece, Familiar (1994), which is part of IMMA’s Collection. In it we see a large red acrylic painting alongside a bolt of flax. In the centre of the painting the figure of small girl floats, like the Virgin being assumed into Heaven, with her hair swirling up above her head. The title alone brings with it a host of associations: it contains the word ‘femme’, the French for woman; it can describe the witch’s ‘familiar’; ‘familiar’ as it relates to the family; something easily recognisable; and also ‘over-familiar’ – impertinent or too intimate. Flax itself is a trope for inbetweenness, it is halfway between plant and linen, in a state of transformation between nature and culture.

The ingenious excavation of art history to uncover contemporary resonances is another recurring feature of Maher’s work. Her 2007 Bestiary series of drawings is based on a careful study of Hieronymus Bosch’s The Garden of Earthly Delights (1490-1510). One of these, The Coral Tent, shows the silhouette of a medieval-style tent under which four feet can be seen. Close examination of Bosch’s painting reveals the source, picked out in red at the centre of the painting. The scaling-up of such a detail creates a kind of artistic collaboration across five centuries. Maher’s major Ombre series (1997), examines among other histories, the story of Mary Magdalene who was miraculously covered by her hair when she cast off her rich clothing; Silvestro dei Gherarducci’s Assumption of Mary Magdalene (1380s) in the National Gallery of Ireland forming a historical antecedent for Maher’s iconic drawings.

Another defining feature of Maher’s work is her remarkably diverse choice of media including snail shells in The Four Directions (2004-05) and nettles in Nettle Coat (1996). Her interest in organic raw materials often sends her work into the realm of the ‘un-collectable’ or, perhaps, the ‘unbecoming’. Her organic works in particular have changed dramatically from when they were first exhibited, making visible processes of decay and putrefaction like a contemporary memento mori, recording the passage of time and repudiating the notion of a permanent artwork. Likewise, her animated 2009 drawings, such as Flora and The Double, each document an unrelenting process of erasure, as elegant and covetable drawings are rubbed-out and the detritus swept onto the studio floor, accompanied by the purposeful humming of the artist. Writing in the exhibition catalogue the curator of the exhibition Seán Kissane, Curator: Exhibitions at IMMA, says: “Many of the themes in Maher’s work have been unbecoming as she questions received notions around art, gender, sex, and social mores. She has sought out lowly objects and abject creatures from the natural world, and made carriers of meaning of them on the fault-line between nature and culture. Simple materials are transformed by collecting a multiplicity of them together and exploding their scale. A Janus-faced Cassandra, Maher articulates the future while mining the past for its connective tissue.”

Alice Maher has had a long association with IMMA. In 1993, Keep (1992) featured in From Beyond the Pale, one of IMMA’s most important early exhibition, and her work was to reappear regularly in exhibitions such as Distant Relations, (1994); The Glen Dimplex Artists Awards, (1995); Irish Art Now: From the Poetic to the Political, (1998); Shifting Ground: Fifty Years of Irish Art (2000); Tír na nÓg, (2004); and Altered Images, (2009). She has an equally strong presence in IMMA’s Collection, including the small, delicate organic work, Berry Dress (1994); the animated drawing, The Music of Things (2009); and the recent commission Cassandra’s Necklace (2012) all of which form part of the current exhibition. Becoming continues a long-running strand of programming at IMMA which presents mid-career retrospectives of the work of Irish artists at a point when the publication of a monograph on their practice is useful and timely. In the past decade this has included Gerard Byrne, Anne Tallentire, William McKeown, Dorothy Cross, and Willie Doherty.

Born in 1956, Alice Maher studied at the University of Limerick and the Crawford College of Art, Cork. She was awarded a Master’s degree in Fine Art from the University of Ulster and shortly after a Fulbright Scholarship to San Francisco Art Institute. She has exhibited widely in Ireland, England and the United States, and represented Ireland in the 22nd São Paolo Bienal. In 2008, the David Nolan Gallery in New York hosted a solo exhibition of new drawings and sculptures titled Hypnerotomachia. In 2007, a large survey show of her work, Natural Artifice, was held at the Brighton and Hove Museums. Also in that year she completed a major drawing installation, The Night Garden, for the Royal Hibernian Academy in Dublin. Earlier exhibitions include: Orsola, an installation at the Oratorio di San Lodovico, Venice, 2006; Rood at the Green on Red Gallery, Dublin, 2005; Portraits at Purdy Hicks Gallery, London, 2003; Gorget at the David Nolan Gallery, New York, 2000; Knot at Dublin City Gallery The Hugh Lane, Dublin, 1999; Swimmers at Le Credac Centre d’Art, Ivry-sur-Seine, 1996; and Familiar at the Douglas Hyde Gallery, Dublin, 1994. Maher’s work can be seen in significant international collections such as the Metropolitan Museum of Art, New York; the Fogg Museum, Harvard University, Cambridge, Massachusetts; the British Museum, London; the Hammond Museum, Los Angeles; and the Pompidou centre, Paris.

The exhibition is curated by Seán Kissane, Curator: Exhibitions, IMMA.

As part of the established IMMA Winter Lecture series which has featured prominent Irish and international artists, Alice Maher presents an illustrated talk on her mid-career retrospective Becoming. A mulled wine and mince pie reception follows this event.

The exhibition is supported by THE IRISH TIMES.