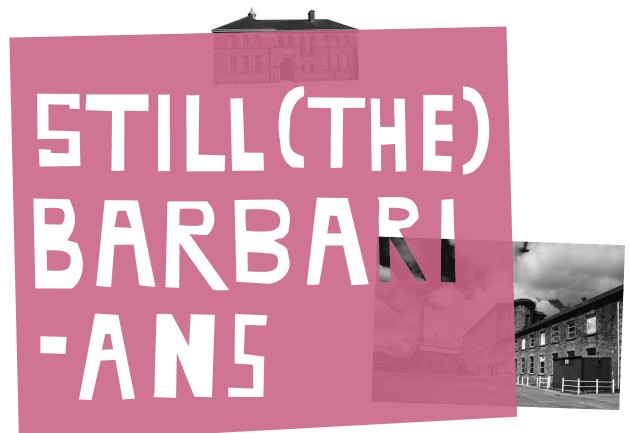 2016 is a meaningful year for Ireland as it marks the 100th anniversary of the 1916 Easter Rising, a moment of great significance in the struggle for liberation from British colonial rule. Responding to the context of the centenary, EVA International 2016 curated by Koyo Kouoh will be entitled Still (the) Barbarians and will investigate the post-colonial condition of Ireland as a point of departure from where artistic reflections, critical redefinitions and political transformations are articulated.

The biennial programme will address artistic, architectural, literary and critical positions that interpret colonial effects on the psyche, landscape and imagination, and that continue to shape our present condition. Diasporic dispersions caused by invasive disruptions of social, cultural, religious and political orders have long been subject matter for artists, writers, filmmakers, architects, scientists and activists. Coinciding with the centenary of the Easter Rising, Still (the) Barbarians aims to draw a concentric artistic and political cartography, mapping the conflations and confines of the global post-colonial typology with Ireland as its central starting point.

The convecting discourses on racism as a foundational and enduring system for exclusion and exploitation will appear throughout the biennial as the framework on which to build contemporary fictions and future utopias of togetherness. Still (the) Barbarians will further examine the relationships between the various forms of mental, physical and institutional decolonization across the world in comparison to Ireland as the primary testing territory of Western colonization systems before their expansion to the global map. Informed by the longstanding and persistent unease with forms of subjugation, alienation, humiliation and dispossession and their inevitable result in war and terror, the curatorial project wishes to engage with practices displaying aesthetics of subversion, transcendence and reappropriation.

Commenting on her appointment and curatorial approach to Still (the) Barbarians, Koyo Kouoh said: “Ireland, which I consider the first and foremost laboratory of the British colonial enterprise, has always been a fixture in my thinking on the psychological and political effects a system designed to humiliate and alienate can have on peoples’ souls. The coincidence of EVA 2016 with the centenary celebrations of the Easter Rising provides a welcome opportunity to engage artists and thinkers in this exciting discussion.”