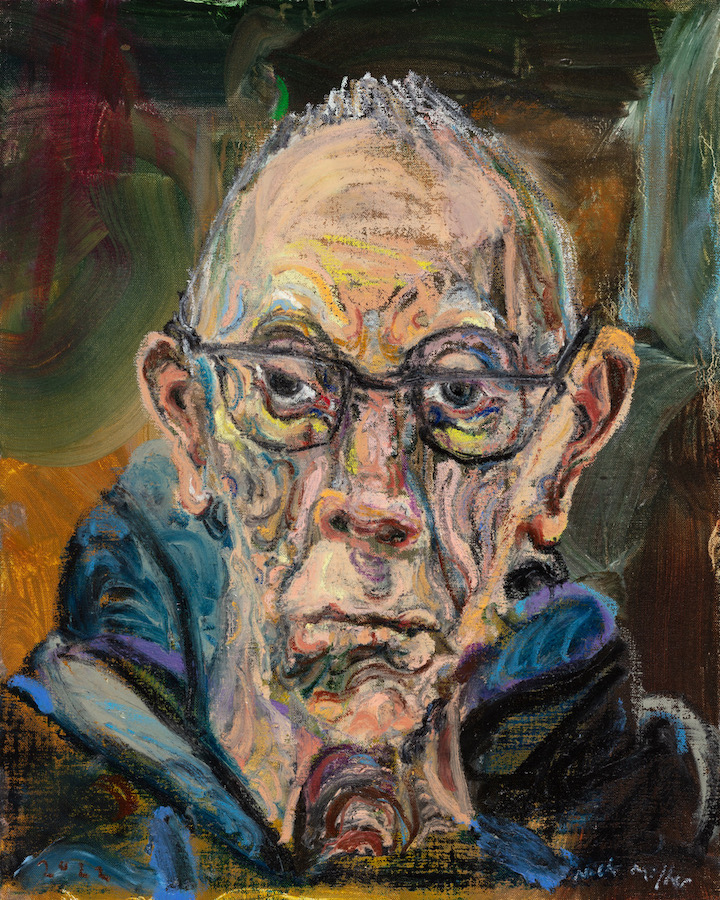 Hillsboro Fine Art presents a selection of works by Patrick Hall and Nick Miller.  Made over the last two years during Miller’s weekly visits to Hall’s studio, a shared working practice for both painters that began by circumstance and became formalised during the pandemic. The resulting works arise from the gift of a quietude and unexpected sanctuary inhabited by both artists as they respond through painting to the worlds in which they find themselves. Patrick Hall at eighty six, continues his open-ended working meditations on consciousness, and freedom. Nick Miller pursues his long term engagement with portraiture, taking ‘being in the moment of making’ and the encounter with Hall himself as his subject. In these repeated moments of Sanctuary – in work and in company – the painter paints the painter painting.

For both Miller and Hall, in different ways, the works themselves are the curious remnants of space and time shared together – attempts to let paintings arise in whatever manner they will, from the energy of life, rather than through the forceful direction of human will. Hall currently draws and paints with ink and watercolour on a scale that does not create physical resistance, allowing as direct a passage possible from consciousness to material realisation. As Miller’s portraits of him often show, he works with both hands ambidextrously but  unconsciously without manifest intent. Nick Miller has regularly painted Patrick Hall since the early 1990s, and these new works began with ink drawings before adopting oil pastels for use in painting,  a new medium for him that came alive in these particular portraits made in Hall’s studio. His 2021 portrait from this series; Patrick Hall – painting is included in the current Zurich Portrait Prize, recently on show at the National Gallery of Ireland and now at Crawford Gallery, Cork.